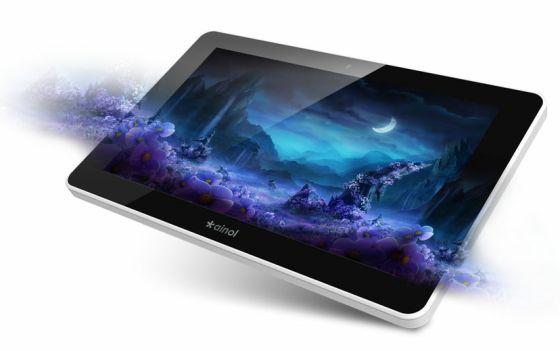 Chinese tablet maker Ainol may have started off small with the Novo 7 Paladin, but now the company is working hard to catch up with the times. In production is a much better device named Ainol Novo 7 Aurora II that will boast of a dual core CPU; the 1.5 GHz Amlogic ARM Cortex-A9 dual core processor, to be precise. That is a big step from the Novo 7 Paladin that came with a MIPS chip, which not only restricted its capabilities but also made the tablet incapable of running many Android apps altogether. That won’t be a problem with the Novo 7 Aurora II, which is slated to be market ready by May.

The Aurora II will have a 7 inch 5-point capacitive touchscreen display and a resolution of 1024 x 600 pixels. Aiding the dual core chip will be 1 GB RAM, while an 8 GB memory will take care of storage requirements along with a microSD card slot to expand memory if needed. The Aurora II runs Android 4.0 ICS, and is expected to cost around $190 when it is launched, which is definitely a lot cheaper that most out there. The Aurora II is Wi-Fi enabled and has a 2 megapixel camera up front. The tablet also boasts of a g-sensor and will weigh only 0.8 pounds.

The Aurora II will definitely be a well received tablet, especially after the Paladin 7 proved itself with a decent performance and a super affordable price tag. The Aurora II is expected to build upon that further.