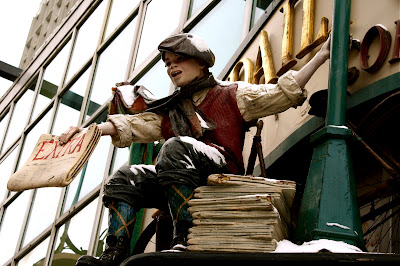 Major Newspapers are trying to undergo a transitional change as they try and recoup some of the loses they are experiencing with the shift away from the traditional paper form format. With all of the current deals and news announced in the last few days, it looks like their will soon be a paradigm shift in the way news is more accessible and delivered.

Firstly lets take a look at the Apple iPad. Its been out since april and The Apple iPad is not the only game in town that has a tremendous amount of support from major newspapers offering both paid and free subscription models. Paid apps include the Wall Street Journal, which offers a $3.99 a week subscription. Other major news agencies such as the New York times the Associated Press, USA Today, and Thomson Reuters offers free applications to view their interactive online content.

According to the Wall Street Journal Apple is working on a secret magazine and news paper subscription model that is set to debut within a few months. This new model is a two pronged effort, one will include trying to have Apple get directly involved in signing up news companies and local news papers to get on board. Apple is also setting up a self serve publishing tool, that will allow news paper companies independantly contribute their magazine or news paper to the pool. Think PubIT by Barnes and Noble, or Amazons Digital Text Platform, but for news papers.

So it looks like Apple is trying to expand on their existing platform and try and be the tablet of choice for major news companies to do business with, but they have serious competition from Google Android and Blackberry.

One of the most eagerly anticipated tablet to launch this year, which received our official Good e-Reader Recommendation Award, is the upcoming Samsung Galaxy Tab. The New York Times, Wall Street Journal and USA Today are building custom applications for the new tablet set for debut in November.

Meanwhile, the Blackberry Playbook is getting support from the Wall Street Journal, Bloomburg and the Financial Times are hoping on the RIM bandwagon for dedicated applications.

Little is known about the details regarding the Samsung Galaxy Tab and Blackberry Playbooks, but it looks like with the decline in traditional news print sales and subscriptions in the last two years, they are racing to tablets to find a viable distribution model that somehow eluded them on the traditional PC and Laptop.