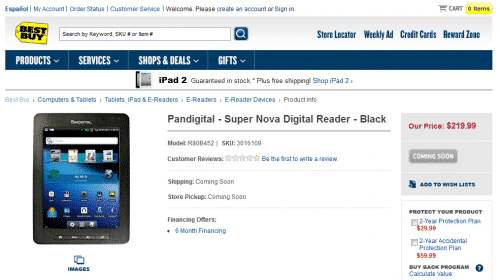 Pandigital has been issuing a bunch of new e-readers this year and many of them have been limited to the USA in terms of sales. The other day we just reviewed the Pandigital Nova, but our hearts remain with the Super Nova. This new tablet will be the best one the company has released to this point in terms of specs and hardware.

The Super Nova comes with a 8 inch capacitive touchscreen display with a resolution of 600 x 800 pixels. The tablet (e-reader) runs Google Android 2.3 Gingerbread and comes with a decent set of features, which include built-in mic and stereo speakers, a mini USB port, front 0.3 and rear 3 megapixel cameras, HDMI out port, and 802.11b/g/n WiFi.

On board storage with the SuperNova is just 4 GB, though there is an SD card slot to add another 32 GB. Android market remains off bounds, but not the SlideMe app store. Also, the SuperNova itself comes pre-loaded with the Barnes & Noble eBook app and store.
The tablet will be on sale in two weeks for around $219.99.