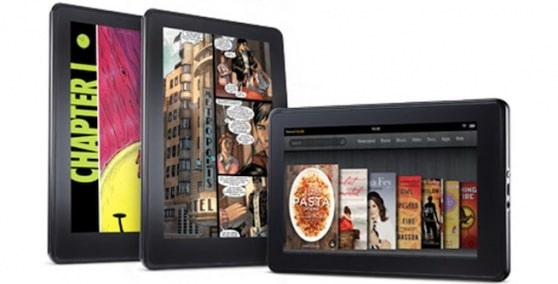 Amazon, it seems is more keen to take on the iPad than anything else. At least, that is how industry experts are explaining the latest rumors claiming the online retail giant is more eager to proceed with the development of a 10.1 inch sibling of the Kindle Fire than an 8.9 inch sized device. The Kindle Fire was launched amid much fanfare in the middle of November. The 7 inch device has not disappointed Amazon, as the tablet went on to become the highest selling Android tablet (though its sales figures never could match up to the iPad). Kindle Fire sales have since dwindled, which means Amazon has to do something special to ensure it remains in the tablet race. A 10.1 inch sized Kindle Fire variant, along with a spruced up 7 inch version that we already know is in the making, might just be it.

Another method of increasing sales of the Kindle Fire is to introduce an ad supported Kindle Fire. This would entail lowering the price even more for a device that is believed to already have been subsidized to keep initial costs low. Amazon is already reported to have initiated talks with a number of advertising agencies to get them on-board to support a Kindle Fire that would display their ads. Sources following developments on this claim Amazon is asking for $600,000 for ads that will be displayed on the home screen of the Kindle Fire, while for a million dollars advertisers can have the welcome screen along with enhanced ad inventory. Plus the advertiser will also be included in Amazon’s public-relations push.

Amazon isn’t revealing how many devices will be allowed to carry the ads, though for advertisers, the prospect of having their wares displayed on a device that has already reached millions of users might be too tempting to ignore. Then again, Amazon hasn’t yet stated whether the move is applicable to the Kindle Fire’s already sold or for the upcoming lot of Kindle Fires. The latter seems more likely as existing users of the Kindle Fire have already paid the full amount for the tablet and a reduced price structure for an ad supported version can’t be made applicable to them. Another model Amazon can approach is to upgrade to a better speced Kindle Fire while continuing to offer the present version with ads displayed at a reduced cost.

Amazon has already tasted success with that a formula on a version of it’s Kindle e-reader and is hoping to replicate the same with the Kindle Fire. For the Kindle e-reader, the ads appear as a screen saver when you are not reading any books and don’t appear to the users when they are actually reading ebooks. What remains to be seen is how the model is emulated on the Kindle Fire, which is more of a tablet device.