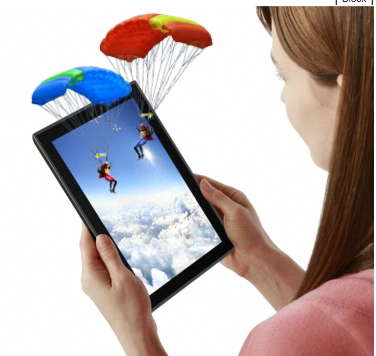 While every other player in this segment is busy putting together a tablet device, consumer electronics major Sharp has gone one step ahead and has stated they are keen to come up with a tablet device with 3D display technology. In fact as per Sharp President Mikio Katayama, its a series of tablet devices that the company intends to launch in future with a 3D tablet being one of them. And of course, when talking about tablet PCs, how can terms like ‘Apple’ or the ‘iPad’ be left out. For Katayama has also done the customary thing of challenging Apple’s dominance in the tablet segment by announcing their tablet will take on the iPad, the highest selling tablet device as of now.

Interesting, its e-readers that Sharp had started out with stating they would coming up with smart new e-book reading devices. The statement has been modified to make the e-readers bigger in their scope and its now ‘multi functional devices’ having color touchscreens that is being talked about.

Coming back to the 3 tablet,Sharp intends to make use of the glasses-free 3D display technology similar to what they have done with portable devices such as the Nintendo 3DS. Sharp makes use of the parallax barrier approach to create the 3D effect when viewed from the front.

However, everything else has been kept under wraps though a 3D tablet will for sure be a mighty device to watch out for. What also remains to be seen if whether it sums up to consumer’s expectations for it might be nice o watch a 3D video or play 3D games on a 3D enabled tablet though the same perhaps can’t be said of reading the daily newspaper. In any case, its exciting times ahead.