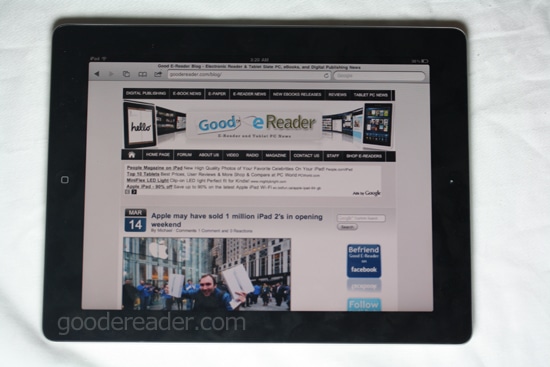 The Apple iPad is going to be the quintessential factor to determine the fate of the fledging Slate industry.

As you can see the Apple iPad has a ton of different models to choose from covering a wide price range to attract various demographics of customers. This works to Apples advantage for their massive marketing effort and wanting desire to see the Apple iPad take off , firing off the first salvo in the upcoming Slate Wars.

Since the iPad was first announced, both a few weeks before and a few weeks after, a multitude of Slate and new E-Reader devices have been shown to the public and have a ton of people excited about the prospect of the new technology to fall into the hands of a mobile-centric crowd. Offerings from Dell, HP, Notion Ink, Neofonie and more showcased upcoming devices to come out during the 2nd and 3rd Quarter of this year.

There is allot of attention on Apple and the iPad to see if the general public will accept this new breed of computing devices, or if sales are lacklustre and the public does not accept the iPad, does the same fate bode to the other companies rushing out devices?

First draw our attention to the fact, that Apple is sold out of iPad Pre-Orders and sold an estimated 20,000 iPad’s an hour, which suggests iPad sales of around $10 million per hour. The Only way to buy iPads on launch day are to visit stores such as Bestbuy or select Apple Stores, but I would not hold my breath. Apple intends on increasing the iPad distribution for an additional ten percent for launch day to select Apple Stores, mainly in Urban Centres such as San Francisco. As well, prospective iPad customers can also take the risk and wait in line around 3 PM. at any Apple retail store: All reserved iPad’s that haven’t been picked up by that point will be open for the masses to purchase. Otherwise, the next shipping date for the iPad, according to Apple’s online store, is April 12. The 3G-friendly iPad is still on-track for a “late April” ship date.

So we may now draw the conclusion that there is initial public interest in this device. Our investigative report on the niche crowd of people purchasing the iPad were media groups, apple die-hards, and the technology addicted. Apple may have sold out of pre-orders, but many people will buy one IPAD. Will the average person see this device and want to buy it? Will the reviews, critics, blogs, television and print media be friendly to this device and hype it up to a public wanting an upgrade from the IPHONE or their net books or laptops? That is the billion dollar question.

What if the iPad Fails? This is a two pronged question looking at the long term implications of the burgeoning slate industry. On launch day, people line up like they did for the IPHONE and buy their devices, new devices will not be available for online ordering, or new shipments fourth-coming for at least a week, some forecasters mention the end of April. Will this long period of time during the height of media coverage and spotlight on Apple and the iPad wane during the time when all units are sold out, and new ones arrive? This is a very real factor, and past products have failed because they could not meet the demand at launch time, and by the time they had more product available, other competitive products had entered the market place and people lost their focus as media coverage for new releases occurs.

The iPad might also fail because the public might not accept it as a viable product that will either change their lives, or be as low cost to attract casual impulse buyers. People may think that the iPad will not be a viable PC substitute and most people either have a smart phone or have a laptop or net book for mobile use. The iPad may not appeal to people financially nor may they may measure it against their current devices and say, this is not worth it

If the iPad Succeeds, this bodes well on the future of Slate Devices and will increase the growth rate of this sector exponentially. There are allot of competing devices to the iPad such as the Notion ink ADAM, the HP Slate, the Dell Slate, the Neofonie WEPAD, many of these devices have far greater specs to the iPad in terms of processing power, memory, multi media viability, flash, and small factors such as HDMI, Fire wire and other features will make iPadprospective buyers give pause. The iPad success will stimulate overall market demand and increase sales across the board. The Publics acceptance of Slate computing could very well change the mobile computing paradigm.

If the iPad Fails does this mean that the slate industry will be just another passing passing fad in the great scheme of the mobile computing market? If the general public does not accept the iPad could this mean that they too will not accept other slate devices with differing specifications on hardware? Could the iPad fail and yet the other companies succeed with more cost efficient entry level prices and partnerships with other companies be a viable way reduce costs to rope in an often fickle public?

Whether the iPad succeeds or fails will strongly influence the future outcome of the Slate wars to occur this year. Let us not forget that until the rise of the IPHONE strongly influenced the smart phone industry and paved the way for a new breed of phone to gain market acceptance across the world. What we know for sure, is that there is allot of attention focused right now on the iPad and the Slate industry as a whole, and its success or failure may change the way we go about our lives with mobile computing.

Please subscribe to our Good E-Reader Magazine featuring Tablet and Slate news to debut this April. New articles, interviews and features abound in this monthly publication. Also stay tuned to our blog for the latest E-Reader News!