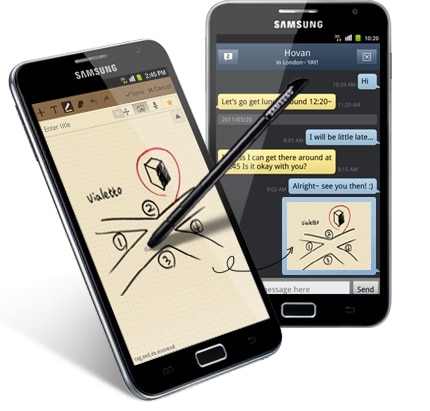 Perhaps we have had enough of Galaxy Tab devices and its time we take note of another class of tablet devices from Samsung — the Galaxy Note 10.1. The name though should have been a secret but for an inadvertent leak from the company’s own website which has since been taken care of promptly. The upcoming Mobile World Congress is set to be the most likely event that would see the bigger cousin of the Galaxy Note being unveiled, as per text in the official blog by Samsung.

The event would be the venue where Samsung has sent out invitations to developers to meet where stuff like S-Pen SDK and Bada OS would be discussed. The latter bit is more compatible with a device such as the Galaxy Note so that a 10.1 inch sized Galaxy Note device might indeed make its debut at the upcoming MCW event. Now if that is exactly how things tun out to be then it would mark the first tablet device to include a digital pen. Samsung Galaxy Note is a 5.3 inch sized device and includes a stylus as part of the package. Also, Samsung is leaving no stone unturned in marketing the device as distinct from both a smartphone and a tablet with the stylus being shown prominently in all promotions.

We can expect to be bombarded with something similar with the Galaxy Note 10.1 soon.