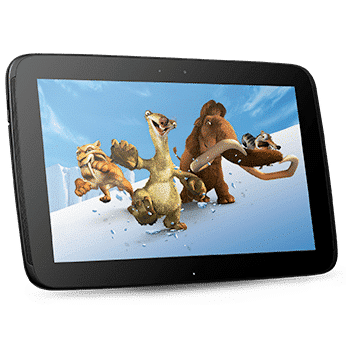 This has been the biggest news of the day! All three tablet devices have launched and they all lived up to the rumors and speculations surrounding them. The 32 GB Nexus 7 is indeed priced at $249, while the 16 GB version of the same has come to occupy the $199 price slot.

The 3G version of Nexus 7 has been priced at $299 for the 32 GB model. Apart from its 3G capability, the tablet is identical to its Wi-Fi only cousins.

A bigger Nexus variant with a 10 inch display is the star attraction of the enhanced Nexus tablet family. With a 1.7 GHz Samsung Exynos 5 dual core CPU at its heart, which in turn is aided by a 2 GB RAM, the Nexus 10 does impress with its brisk performance. The tablet runs the latest Android 4.2 Jelly Bean and offers a pure Android experience, devoid as it is of any UI or company specific tweaks. However, the biggest USP of the device is its display, which packs in 2560 x 1600 pixels within its 10.055 inch screen. That translates to a massive 4 million pixels or 300 pixels per inch at your disposal. Samsung is also claiming a commendable 9 hours of video playback time with the device.

Canaccord Genuity analyst Michael Walkley believes Apple might go on to sell more than 100 million iPads (101.6 million to be precise) in 2013. Apple had taken two years to reach the 100 million sales mark with the iPad, and if Michael Walkley is indeed proved right, it would mean a doubling of iPad sales in the coming year. Also, the company’s recently released iPad Mini is predicted to play a significant role in breaching the 100 million tablet sales barrier in a single year, allaying fears that the mini sized iPad would cannibalize sales of its bigger cousin. The iPad Mini is already off to a flying start and sales are likely to fare even better during the coming holiday season.

Microsoft has ruled out a smaller 7 inch version of its Surface device anytime soon as the company and its hardware partners are focusing intensely on the bigger 10 inch segment as of now. Microsoft is the newest entrant in the hotly contested tablet segment and has high stakes running on both its new Windows 8 platform as well as the Surface device. The Washington based company is keen to push Windows 8 along with the glut of new devices based on it, marketing how suitable it is for both productivity and play. Microsoft would like to promote the Surface not only as a tablet that is better than the competition, but can also as a replacement for a laptop, to some extent at least. A device with a smaller display does not fit such a scheme quite yet, though it is the most happening segment right now. Apple had also ruled out such a device at first, but had to give in with a smaller 7.9 inch sized iPad Mini. Maybe Microsoft will have a change of heart and mind somewhere down the line.

As for a smaller 7 inch sized device, the obvious advantages are better portability, which, coupled with a low initial cost, has made the segment the most popular right now.