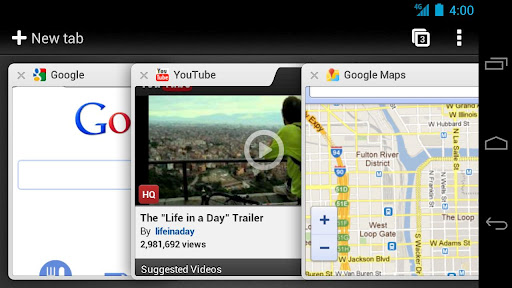 Google has just released their first iteration of their popular internet browser program for the Android platform today. It is technically still in Beta and is fully compliant with the latest version of the Google Android operating system 4.0 or Ice Cream Sandwich.

Google Chrome for Android is made to work as a flip and swipe capable interface working with an unlimited amount of tabs. Tabs here will allow you to move through a collection of screens like a pack of cards, and much easier. Link Preview is another feature that will make your mobile browsing simpler, it automatically zooming in on links when they appear on a page.

If you want to install it today our own Good e-Reader Android App Store has it and can be installed on any e-reader or tablet device HERE. By the way, this version we are hosting will work in any country or region unlike the version on the official Android Market.