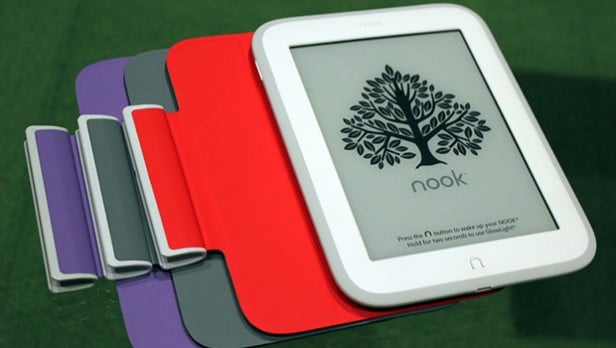 The Barnes and Noble Nook and digital ebook store has lost its shine in recent years. This is partly due to Amazon being the online retailer of choice  and the Kindle having a dominant market share.  Kobo e-readers, audiobooks and ebooks are available in thousands of Walmart stores.  It looks like B&N is not giving up on the Nook just yet, and there are two new executives that are spearheading the division.

The shuffle of Barnes & Noble’s technology leaders occurred when the Chief Digital Officer Fred Argir announced his retirement and William Wood was promoted to the CDO role internally. The bookseller then hired Carlo Pochintesta as Chief Information Officer last week. Carlo and William are going to oversee Barnes & Noble’s e-commerce and Nook business, which had a $6.6 million decline in sales in the last quarter, which included the lucrative holiday sales season.

Carlo Pochintesta brings more than 25 years in managing IT for multi-billion-dollar businesses across the retail industry, including Rag & Bone, Steve Madden, Ltd., Gucci America, Inc., and Ann Taylor. As CIO of Rag & Bone, Mr. Pochintesta led all aspects of the Company’s technology enterprise, including IT strategy, budget planning, capital investments, and performance measurement. At Barnes & Noble, he will be responsible for information technology, telecommunication networks and computer systems, as well as evaluating technology resources and strategies.

Prior to Barnes & Noble, Mr. Wood was Chief Information Officer at EZCORP, Inc., where in 2014 where he led an organizational transformation in Information Technology and was named “2015 Austin IT Executive of the Year” by the Austin, Texas Society for Information Management. He has extensive experience in retail, with previous high-level IT roles at Bass Pro Shops, Brookstone, Inc. and Dollar General Corporation. He has also served as an advisory board member for several companies including Lexmark, Magnetify Corporation and Zeppelin, Inc.

Carlo is new to Barnes and Noble and Wood has been the Chief Information Officer since 2015, before his new role in July 2018. It remains to be seen if they can right the ship in a timely fashion. Getting a company to chart a new direction when it comes to digital content is going to be a daunting task.

Barnes and Noble has a multiyear agreement with the Indian firm that took over software development for the Nook e-reader and the line of Nook apps for Android and iOS, getting out of that contract will not be easy. B&N also retreated from the UK and closed down their Windows app for European customers and only operates in the US now, which is a hyper competitive market for e-readers. They are also contracting out all of their current generation tablets to a Chinese firm and their E Ink e-readers are exclusively designed and manufactured by the Taiwanese company Netronix.

One of the big reasons why B&N decided to outsource everything was to save money. During the early days of the Nook. Their e-readers and tablets were very distinitve and really stood out with their design. This was during the period in which the Nook made billions of dollars and the bookseller invested heavily with their RND office in Santa Clara and launched their own App Store, Video Service and a myriad of other Nook branded apps. One by one, the bookseller shuttered everything and began to outsource everything to other companies and their modern lineup of e-readers and tablets look very generic.

The current generation of management obviously is going to focus on getting the website in order and try and stimulate online sales. The order online and pickup in store has been one of the bright spots of their online operation and so is selling memberships so customers can get discounts for online and in-store purchases. The Nook will be less of a priority, but the two guys are at least running the show and will be for the foreseeable future. Hopefully they won’t be hamstrung by long term contracts with all of the outsourced firms and the Nook may once again be relevant.