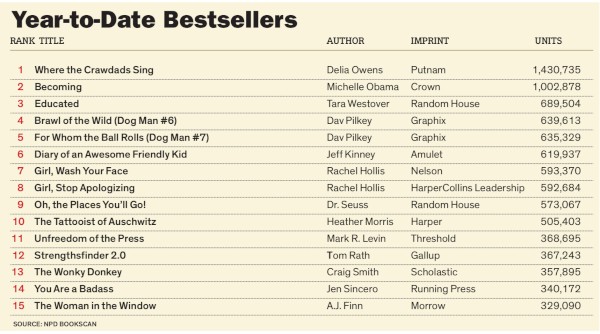 There are three months until Christmas and publishers are hoping to capitalize on a lucrative holiday season. Everyone is going to be issuing their best books of the years lists, in the hopes that they will satiate your literary thirst. When it comes down right down to it, the most popular books are the ones that sell. Good e-Reader has attained the most recent data from NBP Bookscan and it lists the most popular books and how many units they sold in the US.

Where the Crawdads Sing by Delia Owens sold 1.4 million copies this year so far, making it the #1 title of 2019. Michelle Obama’s Becoming, released in November 2018, has sold just over one million copies so far in 2019, making it the second-biggest print seller in the year and the top-selling title in the nonfiction category. Three other adult nonfiction titles cracked the top 10 bestselling books in the year to date: Educated by Tara Westover sold nearly 690,000 copies, while Rachel Hollis had two books that combined to sell nearly 1.2 million copies. One of the most underrated books of the year was Heather Morris’s The Tattooist of Auschwitz, which sold about 505,000 copies.