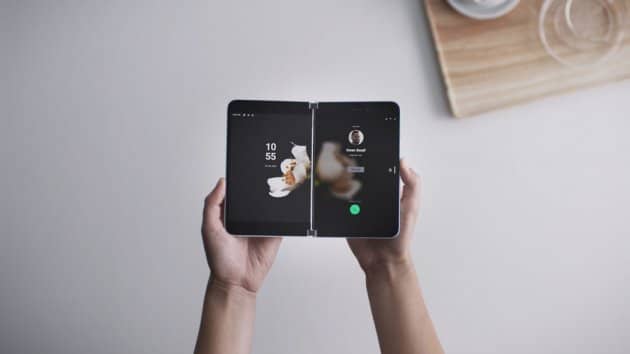 Last week Microsoft announced the Surface Duo and the Surface Neo that will be released in 2020. They both feature a clamshell hinged screen that fold open and give you more ample real estate. Will these devices be the future of reading ebooks on a tablet?

The Surface Neo is dual-screen device built for productivity on Windows 10X, an expression of Windows 10. A 360-degree full-friction hinge connects two 9 inch screens, enabling Surface Neo to adapt to whatever posture you need in the moment. When you open it you have a full-size 13 inch display that can read A4 PDF documents and has the thinnest LCD in its class. It’s built for productivity and multitasking like a true PC would be – running full productivity apps, with a removable keyboard and compatibility with Surface Pen and Bluetooth mouse.

Surface Duo is the first Surface to fit in your pocket. Surface Duo brings together the best of Microsoft productivity experiences, Android apps and Surface hardware design into a single device you can take anywhere. And, yes, it makes phone calls. It has two paper-thin 5.6 inch screens that unfold to 8.3 inches, and just like Surface Neo, it can be used in a variety of modes to let you work the way you’d like.

The larger Surface Neo would be running a version of Windows 10, which means most of the e-reading apps on the existing Microsoft store would be compatible with it. Whereas the Duo taps into the Google Play market, which has the largest concentration of ebook reading apps.

One of the big problems with both of these devices is that developers would have to edit their existing apps in order to work on foldable, using both screens or the entire screen if it is opened fully. This might not be practical for the Neo, which is the largest device, since hardly any ebook reading apps exist for Windows 10, whereas Android on the Duo would just need APIS available for Android Studio for developers to integrate. Many of the most popular e-reading apps like Kindle, Nook and Kobo will likely not support the Duo or Neo. Indie apps like Moon+ Reader, Aldiko, FBReader stand a greater chance at least for one of them to have native support, but the developers are one man operations for the most part, would they be willing to support a one of a kind device?

The Neo and Duo might be great for reading ebooks, but unless there is native support, they might not be the best for reading PDF or EPUB. Both of these products will be released sometime in 2020, so it remains to be seen if Microsoft will release the APIS for Windows and Android soon, so developers can get the jump on augmenting existing apps or creating new ones.