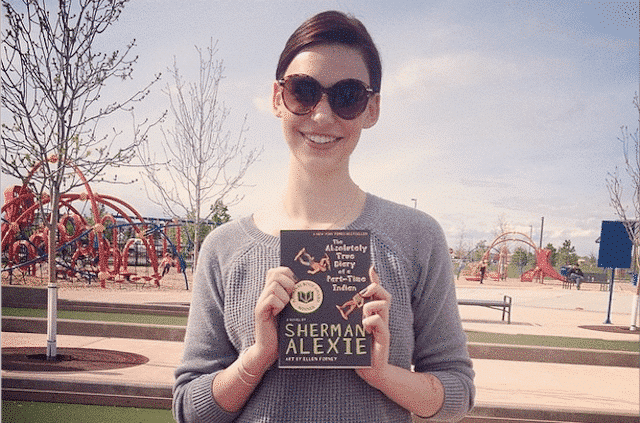 Around two weeks ago parents in the Idaho school district of Meridian successfully campaigned to remove a novel from its 10th grade reading curriculum . The book was entitled The Absolutely True Diary and it won a A National Book Award.  It tells the tale of a Native American teenager who decides to attend an all-white high school outside of his reservation and has themes such as making sense of race, and sexual discovery.

Students who were utterly fed up with a few parents who had a problem with the book decided to take action.  The teens started a petition to have the book reinstated. They collected an impressive 350 signatures, but the school remained firm.

A local indie bookstore heard about the students plight and started a crowdfunding campaign to buy a book for each of the 350 kids who signed the petition. It worked—the campaign raised $3,400, enough for a book per kid.

Rediscovered Books and the students distributed all but 20 books to the teens that came to claim them, but here is where things got interesting. A few parents were livid that the students went out on their own and ended up getting the books that they worked so hard to ban.  Police told local news channel KBOI they had been called by “someone concerned about teenagers picking up a copy of the book without having a parent’s permission.”

That is right, a few parents actually called in the cops because a few hundred teens wanted to get a book that the school had banned. When the police arrived they actually had no clue what they were doing there and decided to let the book distribution go as planned.

The Absolutely True Diary is published by Hachette and they caught wind about what was happening. They sent Rediscovered an additional 350 copies of the book for free and these copies will simply be given away to any teen who wants one.