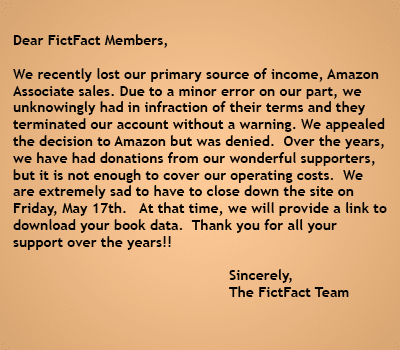 FictFact is a website that allowed you to track authors or series. The service would automatically notify users when a new ebook was available and give you a link to purchase the title on Amazon. FictFact had be operating for a number of years, but had violated Amazon’s affiliate agreement and their account was terminated. With no other revenue streams, but the occasional donation, FictFact has shuttered their website and users have until July 1, 2019 to backup their book data.

FictFact originally launched their site in 2010. Their site was basically all about tracking specific authors or book series. They wanted to focus on helping readers finding books they were really into. This was well before Amazon algorithms took over our lives and GoodReads becoming a household name.