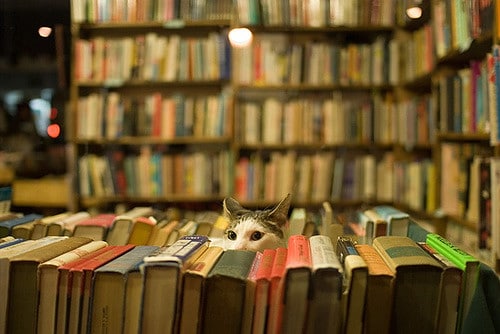 If you have a couple of independent bookstores in your city, chances are one of them has a cat on the premises.  They serve as co-owner, manager, security, and the abiding conscience of the place. Why do bookstores love cats?

To understand why the modern bookstore has a cat, we have to go back in time to ancient Egypt, where cats are believed to have been first domesticated and where the relationship with bookstores can be traced. While mainly used to keep rodents and poisonous snakes away from homes and crops, some cats were trained specifically to keep pests from eating away at the papyrus rolls that contained texts. Without cats, in fact, it’s hard to imagine how Egyptian civilization could have so successfully weathered the diseases and famine caused by vermin—but also imagine the knowledge that might have been lost were it not for those four-legged protectors guarding the temples from tiny intruders. Over time, cats would continue to be called upon to protect sacred documents. You can find cats mentioned in Sufi tales from the Islamic Golden Age that saw huge advances in mathematics, philosophy, and physics, and European monks in the Middle Ages employed them to keep rodents away.

A few hundred years ago, 1745 to be exact, a special decree was issued by Empress Elizabeth of Russia. She was looking for “the best and biggest cats, capable of catching mice” to be sent to the Hermitage Museum in St. Petersburg to protect the treasures contained within from rats. Incidentally this tradition still lives on today.

The modern bookstore does not have a cat simply to chase mice or to catch spiders. Cats are above such mundane, arch-typical behaviors of the past. Nowadays they simply carry themselves in a stately manner and demand that you treat them with a certain amount of reverence, letting you know if you’re doing a good job of petting them and making you aware of what they like and what displeases them.