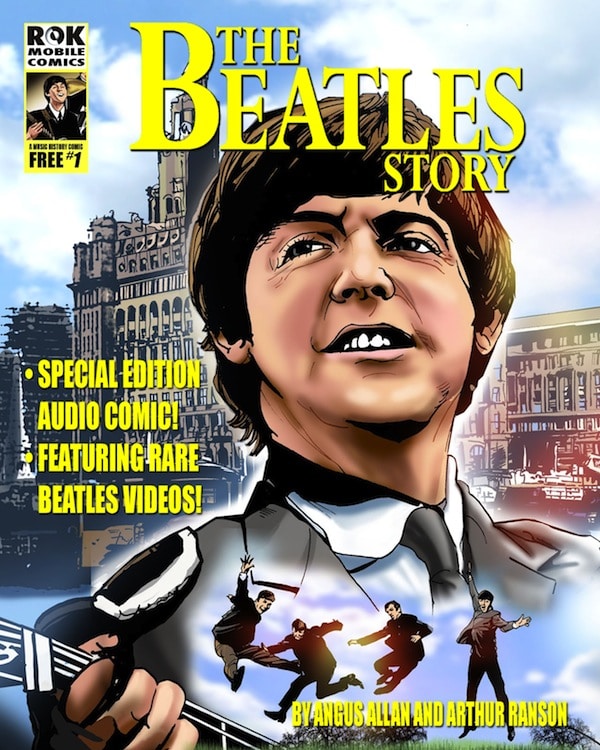 It’s a common complaint that most digital comics are simply print comics slapped onto a screen.

The Beatles Story, from ROK Comics, is indeed an old print comic—it originally ran in the UK magazine Look-In in 1981-82—but there’s a lot more to it than that. It’s also an audio comic, wherein all the text is read aloud by a team of actors. It includes music and film clips as well as interviews with Angie McCartney, Paul McCartney’s stepmother.

The key with an enhanced comic like this is to include the enhanced material in a way that doesn’t interrupt the reader’s enjoyment of the comic. Reading has a flow of its own, and constantly stopping to turn something on—or worse, turn something off—can interrupt that flow if the enhancements aren’t paced properly. For the most part, this comic avoided these pitfalls.

I read the comic on two different tablets, a new iPad and the Nexus 7. The reading experience was quite different, in that the iPad showed a full page of each comic, while the only view that appeared to be available on the Nexus 7 was a panel-by-panel view.

As befits something called an “audio comic,” the comic has the sound on as a default setting. That can be a bit startling if you open it expecting to turn the sound on when you are ready. Fortunately, the sound is easy to toggle off with a button (marked with a word balloon) in the upper right corner of every page (or on the Nexus, every panel). Two other types of icons are scattered across the page: A film projector pops you out of the comic to a film clip, while a little tea label brings up audio clips by Angie McCartney, accompanied by a little text box with more information about whatever she is talking about. These can be a bit tangential: In the first one, Angie describes John Lennon’s aunt as being like a particular type of toffee, and the text explains about the toffee. Others are more interesting, like the one about the Beatles’ fan club.

The voice acting isn’t bad, although it was an interesting choice to have an American narrator. The dialogue is all voiced by British actors, which was a good choice, as the dialogue is written in Liverpool slang; it makes a lot more sense when read aloud, with the local accent and inflection, than when read silently by someone who is unfamiliar with the accent. The actors have enough inflection that it sounds like they are acting rather than merely reading lines, and sound effects as well as background music add to the drama.

Toggling the sound on and off isn’t difficult, but there is a bit of a bug in the iPad version: If you touch the bottom of the page, the sound goes off, and if you do it again, it starts again at the beginning. And with both versions, it isn’t easy to stop the Angie McCartney segments: On the iPad, touching the text box collapses it but doesn’t stop the audio; you have to tap the icon again to open the box, then close it, to make the narration stop. On the Nexus 7, her narration doesn’t toggle at all with the button; you have to use the sound button to stop her.

Aside from those minor flaws, the comic is well designed. It’s also only eight pages long, which is a shame. There is a lengthy text section after that, with illustrations, giving a picture of the music world in 1959, which is interesting but not the same as reading a comic. On the other hand, the comic is free, and the eight pages collected in this issue, which bring the band to the brink of their big debut, were probably a single chapter that ran in Look-In.

Digital media really have the edge when it comes to making a comic about musicians, simply because the music can be included as part of the comic. It’s sort of amazing, given what the rights to the Beatles’ music must cost, that ROK can offer this comic for free, but there is one opportunity for them to make a bit of money: One of the video clips must be purchased for $1.99. The good news is that cheapskates like me can enjoy the comic just fine without it. Presumably we will see more of this in future issues.

ROK plans to release all eight issues of the comic. This will be the first time the entire series has been available since its original release in the early 1980s.