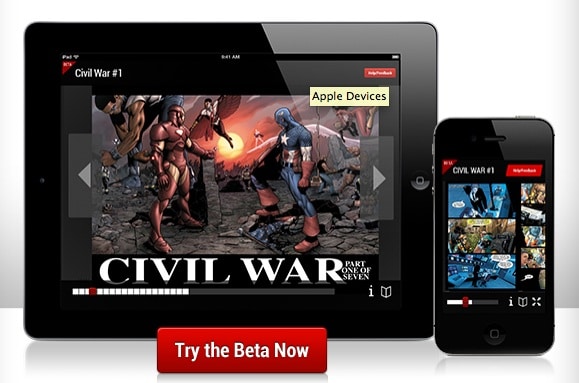 Marvel’s Digital Comics Unlimited is an all-you-can-read service that offers unlimited access to a large library of comics. A subscription is $59.88 per year, which breaks down to $4.99 a month, while a single issue of a new comic is $3.99 on comiXology or the Marvel app. The difference is MDCU is a streaming service—you can read a lot of comics, but you have to have a live internet connection, and you can’t download them. If you let your subscription lapse, you lose access to all the comics. The MDCU and the comiXology apps are independent of one another; you can’t sync comics from one onto the other.

I signed up for the MDCU last year, when I was an Eisner judge, and I think it’s a good deal. I needed to read a lot of comics, but I didn’t need to keep them, so it suited me fine. The library is pretty big and leans heavily on back issues, so I can read a whole story arc at a time, but I don’t think it has as broad a selection of new releases as the comiXology app. I wasn’t crazy about the comics reader, though. The service uses Flash, so it can only be read on a computer, not on a tablet, and the reader is kind of clumsy. The two-page spread is too small to read comfortably on my Mac (which has a 15″ screen), the single-page option enlarges the page so much I have to scroll down to read it, and the “smart panels” option (which pans from panel to panel) makes me seasick. Unlike other panel-view options, it doesn’t gray out the other panels, so it feels like you’re sliding across the page.

So I was intrigued when I got an e-mail this morning inviting me to try out their new Beta for iOS devices, and I checked it out. This is not an app, it’s still browser-based, but the Flash is gone and the reader is simpler. Beyond that, it’s simply more comfortable to read a comic on a tablet than on a computer. In single-page mode the page fills my iPad screen and is very easy to read. Arrows on either side of the page and a slider at the bottom are the only navigational tools, so there’s no clutter. The old reader felt like a frame around the screen, while the new reader is unobtrusive. In landscape mode, the two-page spreads are small, but with the iPad’s retina display (and the fact that I can hold it close to my face) it’s still readable this way. There’s supposed to be a panel view option, but I couldn’t find it. On an iPad it’s not necessary anyway. On the iPhone, the comic appears tiny. The reader supports pinch-to-zoom on both devices, but it’s jerky and sometimes causes the page to disappear. On the iPad, it somehow shrank the comic to iPhone size, but refreshing the screen brought it back. One thing that takes getting used to is that unlike just about every comics app, this reader doesn’t turn the page with a swipe—you have to use the arrows.

The developers may not have worked out all the bugs yet, but if you just stick to the page-turn arrows, the iPad version of the MDCU is a much more comfortable way to read comics than the computer version, and even the iPhone version is fine if your eyesight is good.

If you want to take the MDCU for a test drive, the video chat service ooVoo is offering 30 days for free if you sign up with its service, or you could just get a one-month subscription for $9.99. Some comics are available without a subscription, but the tablet beta seems to be for current subscribers only—I wasn’t prompted to use it until after I logged in.

The email I got promised that improvements, as well as an Android version, are on the way. I have to admit I haven’t used my MDCU subscription recently, but the ability to read on my iPad has me interested again.