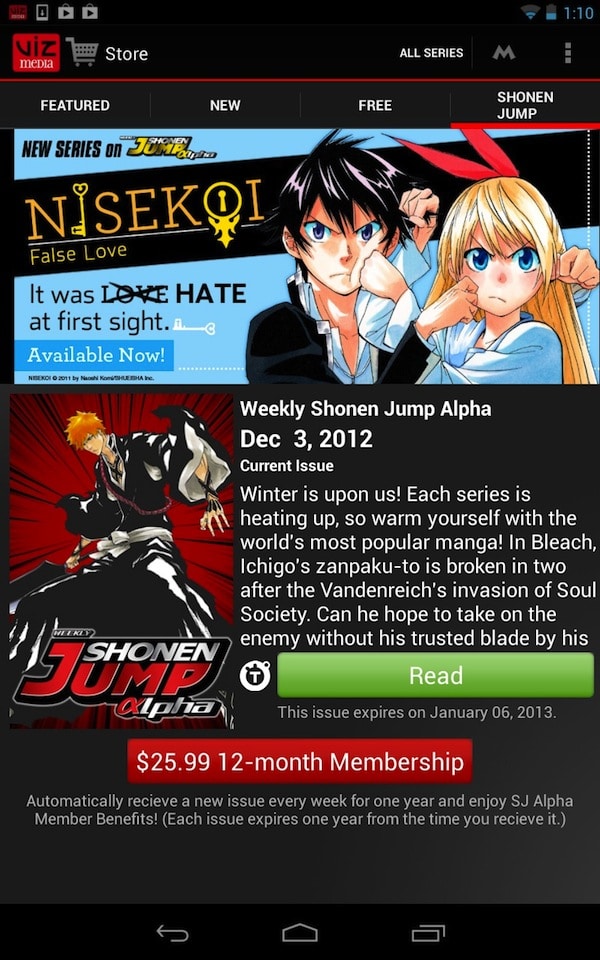 Viz Media, the largest manga publisher in North America, announced a new twist to its digital app last week. Its flagship magazine, Shonen Jump Alpha, will be free to users of its Android app. “The promo offers right now entail free app download, games, and such,” said Viz spokesperson Jane Lui in an e-mail. “New promo offers will be available each week.”

I tested this out on a Nexus 7 tablet. The first step is to log in to the Viz app. The latest issue of Shonen Jump Alpha shows up right away, with two buttons, “$0.99” and “Free.” Touch the “Free” button and the options appear. When I tried it, I was shown four games: Blood Brothers, Hellfire, Santa’s Village, and Rage of Bahamut. I downloaded and launched Santa’s Village, and when I returned to the Viz app, the latest issue of Shonen Jump Alpha had a “Download” button. That was it. It was easy and worked smoothly. The only catch is that it pops you out of the Viz app to the Google Play store to download the game, then into the game itself to launch it. Once you do that, you can go back to the Viz app and the issue of Shonen Jump Alpha will be ready for download. Each free issue is good for four weeks, according to Lui. Blogger John Jakala tested out the service a few weeks ago and noted that once it is downloaded, the issue can be synced onto the user’s other devices. For my money, though, the Nexus 7 is a fine platform for reading; the screen may be small, but the resolution is good enough that the comic appears sharp and readable in both the vertical and the double-page modes.

The ads are served by a company called Flurry, which has created an ad-serving platform that provides in-app adds targeted to the app’s particular audience. This seems to be an idea whose time has come, as Venture Beat reports that over 1,000 mobile app publishers have signed on with the service.

Viz has some other digital deals that are available across all its platforms. As the company gears up to begin releasing chapters of Naruto, Bleach, and other series simultaneously with the Japanese Shonen Jump, it is offering a free Shonen Jump Alpha Starter Pack to help readers bridge the gap between the North American releases and the Japanese chapters. Also, from now through January 8, the company is taking 20% off the price of manga sold via its apps and website, which brings the price of most volumes of digital manga down to $3.99.

For Viz, the ability to offer Shonen Jump Alpha for free is a big step forward; many of its readers are too young to have credit cards, and Viz is competing with bootleg sites and apps that offer the same manga for free. When I spoke to Viz senior vice president Alvin Lu and Gagan Singh, head of their digital division, Singh said, “There are two axes that drive the sales in our business, other than the content. There is the timeliness of the content and there’s the price. And the farther out you are with high price and the farther removed from simultaneous, the worse off your sales are. The holy ground is where it’s simultaneous and you get the price as low as you possibly could. We are going to continue to find ways to narrow the gap on either of those [axes].” With this new ad initiative, it looks like they are doing just that.