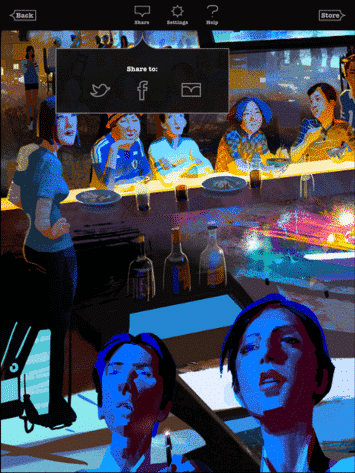 Madefire has developed Motion Comic technology aimed at companies who want to develop their own unique content. Recently at the New York Con COO Liam Sharp talked about some of the tools and comics they developed. He said their tool enables creators to break free from the conventional structures of sequential art. Their goal is to provide episodic reading and interacting in an entirely new way. Audio and Video elements are baked into the comics that have strong interactive elements.

Madefire has hired a ton of artists and animators to showcase their technology with almost 12 different issues available via their App. The company recently released their first iOS app and alluded to Android variants being released in the future. The app and all accompanying comics are currently available for free, “as long as possible,” Sharp said. A future of paid content would likely mean 99-cent or $1.99 fare.

I think this new technology mainly appeals to comic book production companies and I doubt Madefire will make any money distributing their limited amount of content. Companies like Marvel have experimented with these type of interactive dynamics with their Iron Man Mark VII App.