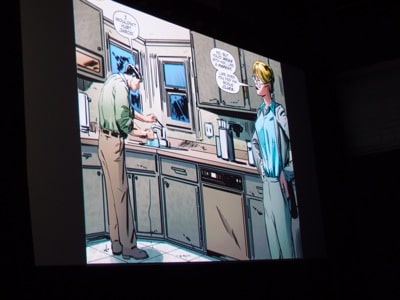 Mark Wald of Thrillbent participated in the closing keynote speech of the Tools of Change conference in New York. He said that “Comics have a problem in the digital space because they are in portrait format almost exclusively. They tend not to work well in landscape mode, which is how they are displayed on tablets and laptops.  Many comic pages are too large and dense to display well on current readers.  We tried to solve this with something called motion comics, which has a few effects and are a bit livelier on the page.”

Wald founded a site call Thrillbent which is designed to display comics in a way that they can be appreciated on current readers.  All the comics are free at this point. Mark gives a demonstration that is completely visual and can’t really be described.  Instead of “turning pages” images are added and subtracted to continue the story.  It’s very hard for comics to deal with exposition.  It’s a terrible use of comic real estate. His model makes necessary exposition much more interesting.  It takes advantage of what digital does.  Panels load dynamically, no page reloading, with optimized fonts and responsive movement.

Comics are doing well as a medium, but he wanted to take advantage of what technology can do now.  Nowadays, the most expensive part of a comic is printing.  For a $4 comic he gets about $1.60 back and $1 of that goes to printing. Add another 50 cents for other expenses and not a lot is left. The company decided to go digital first; do each installment weekly, add some other material, and then sell through Comixology. This way Thrillbent can recover the production costs. A lot of other models are available that they haven’t tried yet. An iPad app will be coming out soon. And the whole process is done by three people in their spare time.