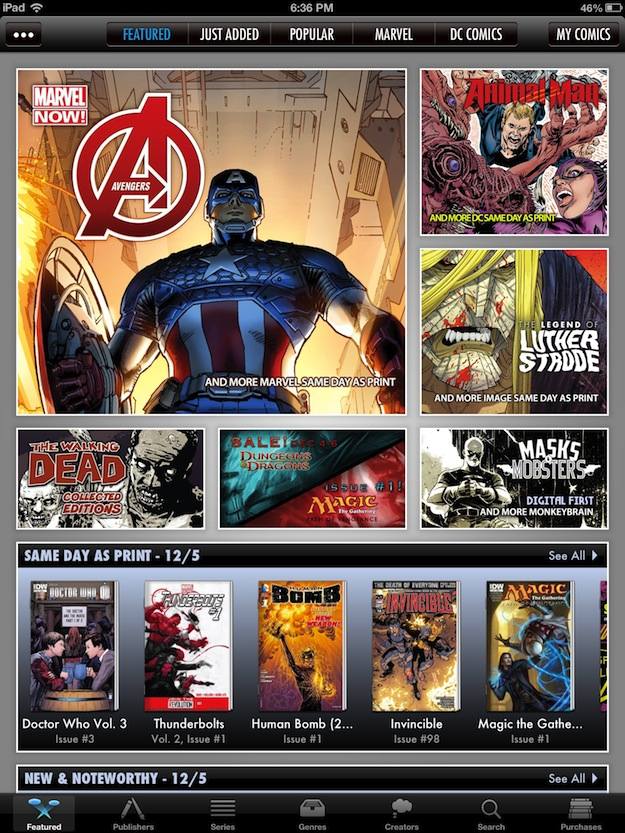 While these are all good insights, there’s another point that David hasn’t touched on. Call it the “0th” commandment if you like, because it comes first and affects all the others: Think about who your consumer will be. In the case of comiXology, Steinberger had one specific segment of the comics reading public in mind: Readers of weekly, single-issue comics who get their comics from comics shops. In fact, comiXology started as a way to help people find previews and set up subscription lists (pull lists) in brick-and-mortar stores, back when the iPad was just a twinkle in Steve Jobs’ eye. As a result of this focus, comiXology emphasizes weekly comics over collected editions and graphic novels, and it is organized more like a comics shop than a bookstore. Comics released in digital the same day as print are prominently featured, and there is a strong emphasis on getting fresh content every Wednesday (the day comics readers head to the shop to get the new releases). It seems to be working, as comiXology is regularly the top-grossing app in the iTunes Store on Wednesdays, and interestingly, the company seems to be expanding the market rather than cannibalizing print, at least for now.

Crunching the numbers on digital comics

Writer Jim Zubkavich, who has achieved quite a following with Skullkickers, runs the numbers on digital comics to explain why digital comics often cost as much as print. The reason is that there are still expenses, especially if middlemen are involved, and digital comics sales are only a fraction of print sales. “The creative team gets more of the pie with a digital sale, but it’s a smaller sized pie right now,” he says, estimating that digital comics sell about 10-15% as many copies as their print counterparts.

At The Webcomic Overlook, Larry Cruz tests out a handful of webcomics apps for smartphones and comes away mostly unimpressed; some are simply bookmarks that direct you to the comic in a browser, while others are crashy. The exceptions are the apps for two well established comics, Least I Could Do and Schlock Mercenary.

John Freeman of ROK Comics, the publishers of the Beatles audio comic I reviewed the other day, talks about the biggest challenge to digital comics today: Getting noticed. “You’re battling for attention in a very crowded marketplace which some major players are seeking to dominate by saturating that market with whatever they can, some of it below par—just like they did in the direct comic sales market, to the detriment of our industry in the 1990’s. And you’re not just battling for attention with comic publishers. For example, there are, what, 18,000 book titles on the UK iTunes store aimed specifically at children? Getting your project attention is a major part of the battle to achieve a good sales volume.”

“The other problem, of course, is that much of the competition is free, as in bootlegs and pirate sites.”