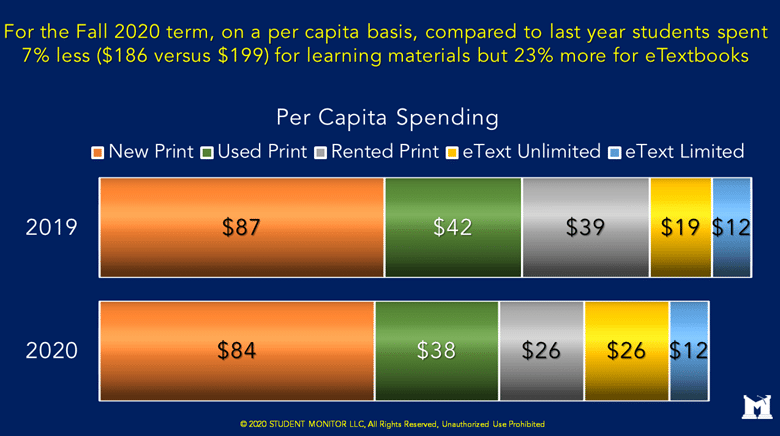 Average student spending on college textbooks and course materials continued to decline during the fall semester of 2020, dropping 7% compared to the same term last year. According to Student Monitor, average student spending on course materials was $186 for the Fall 2020 semester, a decline of 7% when compared to the Fall 2019 spend of $199. The decline was primarily the result of a shift in spending from print textbooks to lower-cost eTextbooks, including subscription models. At the same time the number of units purchased or rented increased by 3%, including a 23% increase in spending on eTextbooks.

“During the fall semester of 2020, distance learning drove widespread adoption of less expensive eTextbooks in both sales and rentals – including through subscription models – leading to a 7% decline in spending as compared to the same period last year,” commented Eric Weil, Managing Partner, Student Monitor. “At the same time, the volume of sales increased by 3%, which means that students are buying more course materials than last year, but they’re purchasing less expensive digital alternatives.”

Student Monitor’s Fall 2020 findings reflect a multi-year trend of declining student spending on course materials.  The annual decline was most recently reflected in the College Board’s October release of Trends in College Pricing and Student Aid 2020, which brought important clarity to the amount students actually spend on course materials, finding an average of $410 per year.  The annual figure also closely mirrors annual data from both Student Monitor, and the National Association of College Stores’ research arm, Student Watch.