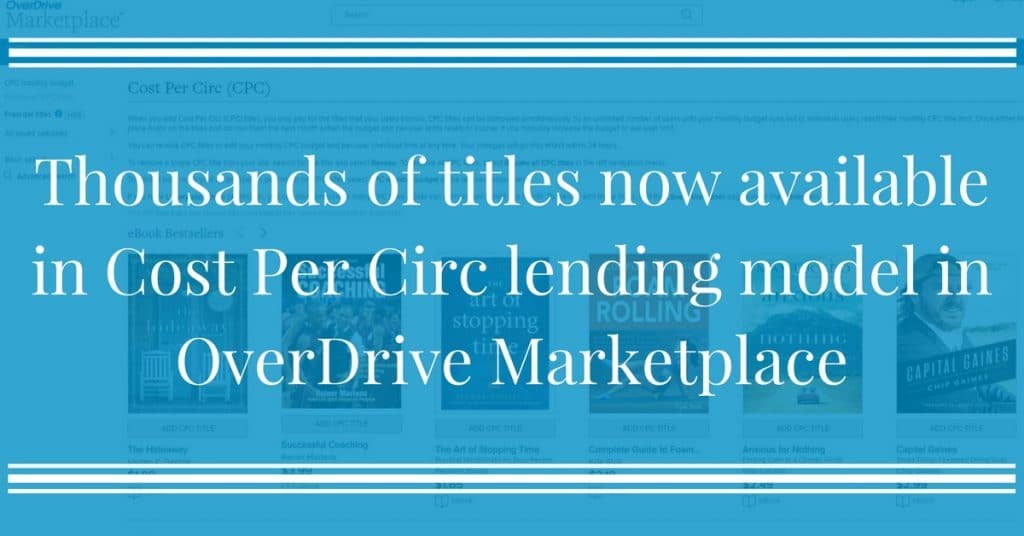 Overdrive announced a new Cost Per Circ system last year and it allows libraries to have a huge influx of digital content that can loaned out to as many users as they want simultaneously and libraries only pay when the audiobook or ebook is actually borrowed. This is a great way to populate an extensive digital catalog, without having to pay for each title individually, or spend time picking and choosing. Overdrive has been testing this new system with a handful of libraries and Cost Per Circ is now live.

Some of the titles you’ll find available in the CPC model include The Zookeeper’s Wife by Diane Ackerman, classics by Agatha Christie, the Pete the Cat series by Kimberly and James Dean, the Seekers series by Erin Hunter, Brave New World by Aldous Huxley, 1984 by George Orwell and Astrophysics for People in a Hurry by Neil DeGrasse Tyson.

The greater benefit of this new access model is that it’s just one more option for libraries and schools. They can mix their collections with a variety of access models – from one copy/one user, metered access to simultaneous use and Cost-per-Circ for eBooks and audiobooks – depending on the title, expected demand, and budget. Major publishing houses such as Simon & Schuster Audio with a selection of their audiobook catalog, Baker Publishing, Lerner Publishing and many more will make their catalogs available in Cost-per-Circ in addition to one copy/one user. With PDA models including Recommend to Library, Demand-Driven Acquisition and now Cost-per-Circ, libraries and schools will be able to more efficiently manage their digital book collections and target specific areas of their community by giving them more control of the books they purchase. For example, this model can complement school libraries’ existing models by adding a large collection of non-English or other independent titles for personalized learning.

Overdrive has launched this new system in order to offer a compelling alternative to Hoopla, who pioneered pay-per-use or what Overdrive is billing as Cost-per-Circ. In a few short years Hoopla went from a handful of libraries doing business with them to over 900.