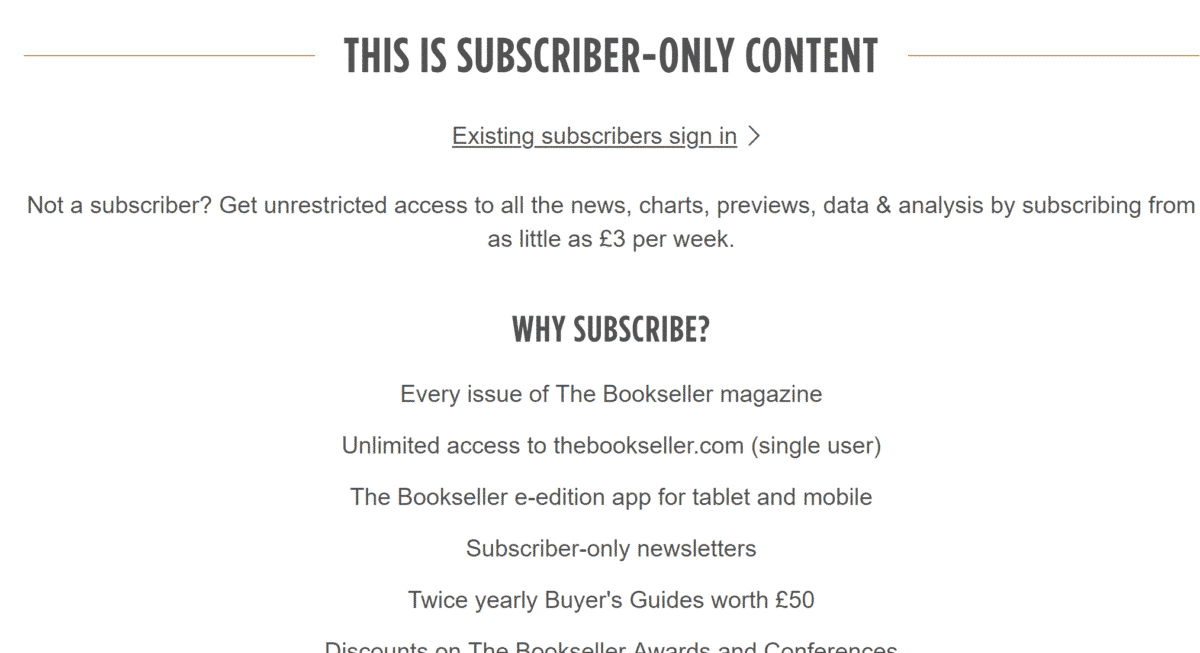 If you are want to stay abreast of all of the latest digital publishing news, Paywalls are making a comeback. Most of the largest websites are hiding the vast majority of their stories, unless you subscribe. Publishers Weekly is making most of their latest news stories locked, you can subscribe for a few hundred a year to read all of them or a monthly sub for 19.95. Publishers Lunch, has two different tiers of Paywalls, they offer a 1 month subscription for $25 or a 12 month for $275. The Bookseller, from the United Kingdom has also been increasingly making most of their articles available only to subscribers, monthly costs £15.00 and yearly £168.00. The Quill and Quire, one of the largest sites in Canada have also been going gungho with paywalls, one month is $15 and one year is $180.

Publishers Weekly, Bookseller, Publishers Lunch and Quill and Quire are just the latest examples of companies that have been accelerating the number of daily articles that go under a paywall. There are very few articles that are available online and are free to read, mainly news that would not really be interesting for a general audience. Most of the more compelling stories are now always under a paywall. If you want to subscribe to to them all, on a monthly basis, would be around $100 and a year would be over $700. The Bookseller and Publishers Weekly also offer a print magazine, which increases the cost by a another few hundred.

There is some value in supporting your favorite digital publishing news publication, if you tend to read only one. News companies often have a physical location and numerous staff. If they also publish their own magazine, there are costs associated with that too. All of the aforementioned news services rarely blast their readers with adverts. Publishers weekly is the lone exception, they tend to have adverts for their own services, such as paid review system for indie authors.

What are the free sites that you can read? Publishing Perspectives is a great resource who focuses on the international publishing scene. They leverage Google Ads for revenue, but they have a really small staff. The Library Journal is also free and relies on advertising, they tend to focus on the US library market. The Passive Voice is a small one man operation, users submit interesting stories from around the web and they curate them and do an original summary of the article and then link the source. They have a great community and only rely on the Amazon affiliate program. There are a few others, I can think of, but they are mainly regional sites from the Netherlands, Germany and other markets.

Will Good e-Reader gravitate towards a paywall too and follow the growing industry trend? No. Good e-Reader has been publishing news content on ebooks, e-readers, digital publishing, audiobooks, manga and newspaper/magazine news since 2008. We have always been ad supported, which is normally enough to pay for our hosting, CDN, technology, staff and to always be introducing new features. Our online store is also doing really well, so that also helps pay for the entire Good e-Reader enterprise. We also would like to thank all of our readers for supporting us and making Good e-Reader your online destination for world class e-reader reviews.