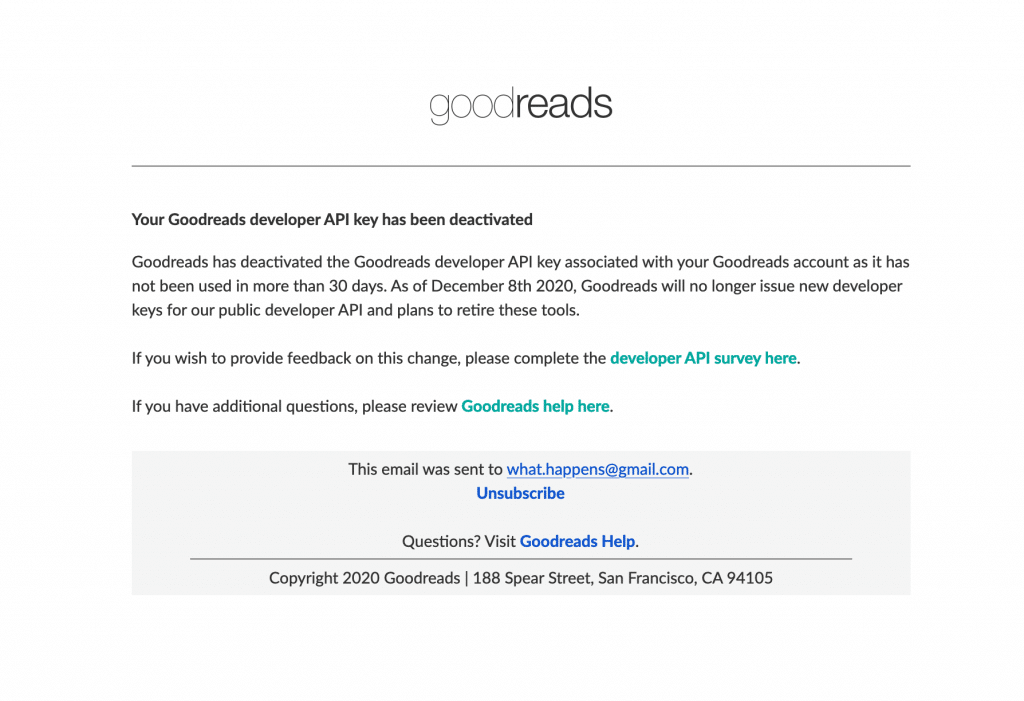 GoodReads has an API program that they have been running since 2010. Developers could get access to metadata, cover art, book descriptions and a host of other data. The company has quietly suspended the ability for new keys to access the API and has already been emailing developers, telling them their API access has been shut off.

Some developers have taken to the API discussion boards and blogs, but the overall impression I’m getting is grim acceptance. Really the surprising thing is how long it took them: Amazon has been in charge at Goodreads for almost 8 years now, and I think we’ve all been expecting this to come at some point. So why now? What’s changed? Well, the fact is the market’s changing – and Goodreads isn’t. Alternative options are starting to emerge, and since Goodreads has forgotten how to innovate, it wants to use its market position to stifle innovation instead.

Right now any API key that has not been active for at least 30 days has been suspended. All other developers will have their APIS shut off in the next couple of weeks. It is time to start looking at alternatives to fetch metadata and other reading information. The Open Library provides a ton of access for book related things and ditto with Librarything.

There is no set date in which GoodReads is completely shutting off API access, but it looks like this will be done within the next couple of months. This is a serious blow to existing developers have have hundreds or thousands of man hours invested in their apps or other companies that paid thousands of dollars to have apps created for them, that rely on the Goodreads API.