You are here: Home / Digital Publishing News / It’s Not a Good Time to Be a Red Hen 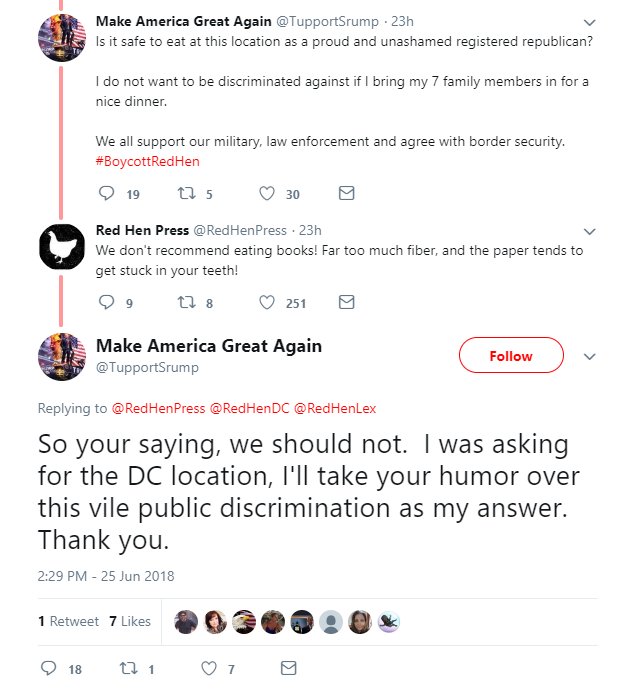 White House Press Secretary Sarah Huckabee Sanders doesn’t evoke a lot of sympathy from many people, largely because of her impossible role in the administration. It is her job to almost daily stand before members of the media and justify every comment, action, and unfortunate tweet that Donald Trump issues. Unfortunately, a lot of people feel that Sanders not only doesn’t do this job well, but that she only accomplishes it with equal parts evasion, insults, and outright lies.

Recently, Sanders attempted to have dinner at the Red Hen, a small business located in Lexington, Virginia. There was allegedly some reluctance to serve the press secretary, and by many accounts, the owner of the restaurant took a vote among her employees who were at work during that shift. They unanimously decided to ask Sanders and her party to leave on the basis that they didn’t wish to serve a patron whose views and actions were so violently opposite their own. Everyone involved, including Sanders, has said that the exchange was polite and unheated. Later, Sanders took to Twitter to shame the restaurant by name for their actions, prompting a tidal wave of fury about the lack of civility towards government officials in this administration.

So it’s confusing as to how Red Hen, a small restaurant located three hours away in DC, got caught up in the controversy. What’s even more confusing is the firestorm of Trump-supporter outrage lobbed at Red Hen Press, a publishing company.

The Pasadena-based company has published an impressive catalog of titles, but their best work may have been their social media performance over the past few days (that’s not to disparage their catalog in any way, but rather to point out the genius of their ability to take misdirected vitriol with a laugh). The company’s Facebook feed has been a playground of both criticism and support, with some self-proclaimed writers going so far as to leave a one-star review on the firm’s business page. Over on Twitter, more than a few tweets have demonstrated that the company not only values the right to expression (no matter how asinine it may be), but that they can fire back at ignorant rage when it’s called for.

Unfortunately, other reactionary pro-Trump headline stories aren’t at all humorous. Only two days after Milo Yiannopoulis, failed author and all-around cretin, openly called for vigilantes to “gun down” journalists, a gunman entered the offices of the Capital Gazette in Maryland and opened fire on journalists working in the newsroom. It’s too early to give definite numbers, but there are reports of several fatalities and numerous injuries.