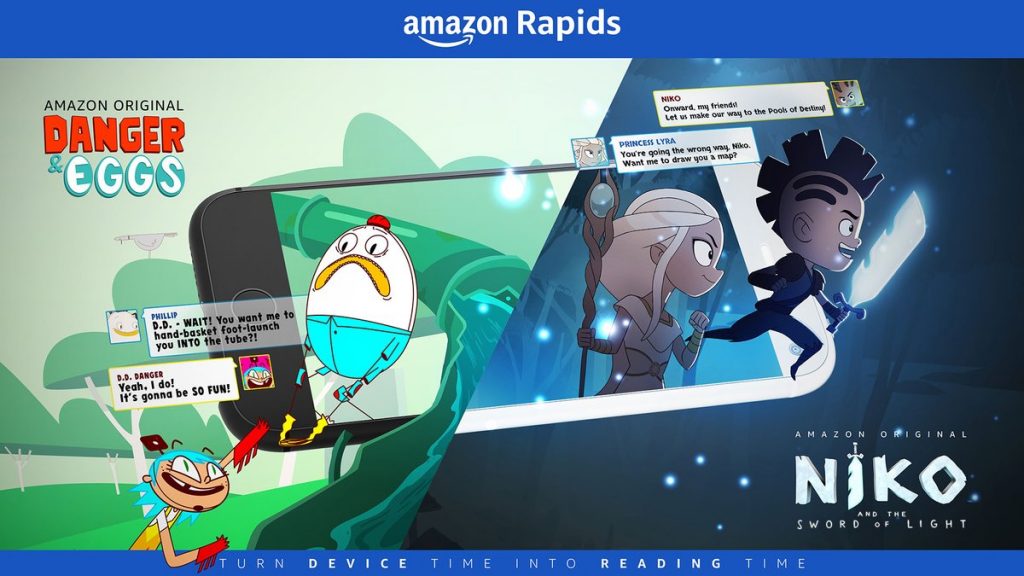 Amazon Rapids launched last November and features short stories for kids. All of the content is delivered in the style of an instant messaging app and are told through the lens of characters chatting with each other, one message at a time. Today, the company unveiled a huge update called Signature Stories which brings new stories from children’s TV shows, Niko and the Sword of Light and Danger & Eggs, to the app. Kids can read along with some of their favorite characters and celebrity voice talent including Aidy Bryant in Danger & Eggs and Tom Kenny in Niko and the Sword of Light. These original stories are authored by the shows’ writers and give a glimpse into unique adventures that take place beyond the TV series storylines.

Danger & Eggs follows the endless adventures of a fearless, teal-haired future stuntwoman, D.D. Danger, and her ever-cautious best friend, a giant, talking egg, named Phillip. As the daughter of a world-renowned daredevil, D.D. is always chasing her next big thrill.

Niko and the Sword of Light follows 10-year-old Niko who is the last of his kind in a strange, fantastical world. He must embark on an epic quest to defeat the darkness and bring the light back to his land. Armed with his magic sword, brave Niko journeys to the Cursed Volcano, making new friends and powerful foes along the way, all while uncovering secrets about his mysterious past.

The new stories are a byproduct of Amazon Studios and the company is actively courting other companies to get their IP’s involved in Rapids. This app is designed for kids  5-12 and is competing against Wattpad Tap.

Amazon Rapids is only available to download in the US, but you can use it in other countries. You can get it today from the Good e-Reader App Store.