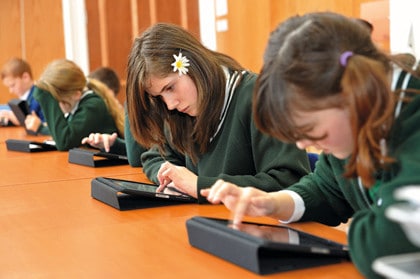 The US government is poised to commit to a five year plan to integrate digital textbooks into the K12 educational system. There are many benefits of going this route because of the interactive nature and higher potential to enamor students. Apple is one of the leading companies in America that stands to benefit from this arrangement with its new ecosystem unveiled last month.

Education Secretary Arne Duncan said earlier today that “Do we want kids walking around with 50-pound backpacks and every book in those backpacks costing 50, 60, 70 dollars and many of them being out of date? Or, do we want students walking around with a mobile device that has much more content than was even imaginable a couple years ago and can be constantly updated? I think it’s a very simple choice,” Duncan said in an interview.

Digital Textbooks are nothing new and companies such as KNO have been doing it for years. New projects have been launched in Florida, Idaho, Utah and California. One of the barriers so far as been dedicated high-speed connections to push the data and WIFI networks being employed by the schools.

Textbooks are big business and about $8 billion is spent annually in the U.S. on children in kindergarten through 12th grade, said Jay Diskey, the executive director of the school division of the Association of American Publishers. Diskey said textbook companies have been working on the technology for the past five to eight years to transform the industry, but that in many cases, schools simply aren’t ready.

There is no disputing that in wired cities and select areas digital textbooks are a boon. If you are reading a science book you can interact with the molecules and get 3D renderings on cancer cells. Updates can be pushed right through the Apple App Store and immerse students because of the interactive nature.

The American government much like Russia seems committed to the Digital Textbook revolution but the future remains uncertain. Small town American simply does not have the infrastructure in order to provide enough bandwidth and internet access to the schools to facilitate downloads. Obviously students will benefit from the low prices and schools themselves will save money on buying books that will be outdated in a few years.

The way I see it the best way for schools to handle digital textbooks is to put the onus on the parents to purchase the books at a low price instead of providing the books themselves. Part of the problem is because there is no aftermarket for digital textbooks, the school would need to purchase them each semester for each student individually. Not to mention how will schools and especially schools that are not generally higher income based, will handle giving the students iPads or other tech to read the books on? The schools would be better off upgrading their bandwidth and WIFI connections in order to serve data faster. In the end, I doubt we will see a ton of schools embrace digital textbooks. The logistics would be a nightmare and most administrative staff are not technologically savvy enough to make this work.