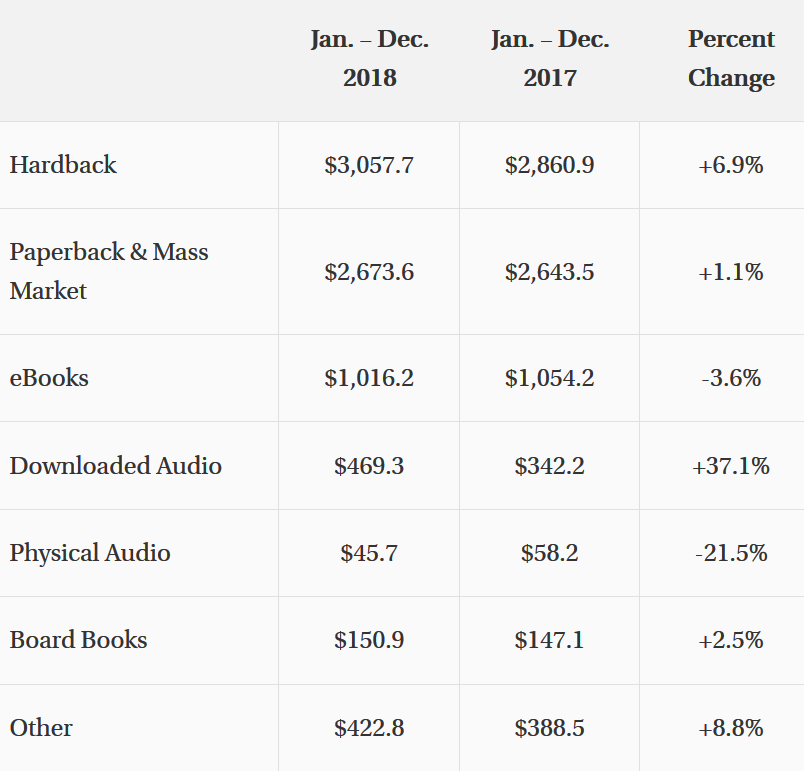 Since 2013, downloaded audio has been the trade book format with the greatest percent growth. In 2018 it grew by 37.1%, adding $127.1 million in revenue compared to 2017. eBooks declined slightly during the same period by 3.6% and generated over $1 billion dollars.

Revenue for trade book publishers was $7.49 billion in 2018, an increase of $341.5 million (4.6%) compared to 2017, according to the StatShot Monthly report from the Association of American Publishers. Each of the trade book categories – Adult Books, Children’s/Young Adult and Religious Presses – saw revenue growth. Revenue for trade books includes sales to bookstores, wholesalers, direct to consumer and online retailers.

Adult Books – grew the most ($247.4 million) compared to 2017. Revenue for downloaded audio and hardback increased by double digits within the Adult Books category, but not every format benefitted from the category growth – mass market books and physical audiobooks saw declining revenue compared to 2017.

Overall publisher revenue for all tracked categories (Trade, PreK-12 Instructional Materials, Higher Education Course Materials, Professional Publishing, and University Presses) in 2018 was relatively flat at $14.55 billion (-0.4%) with a decrease of $57.0 million compared to 2017.