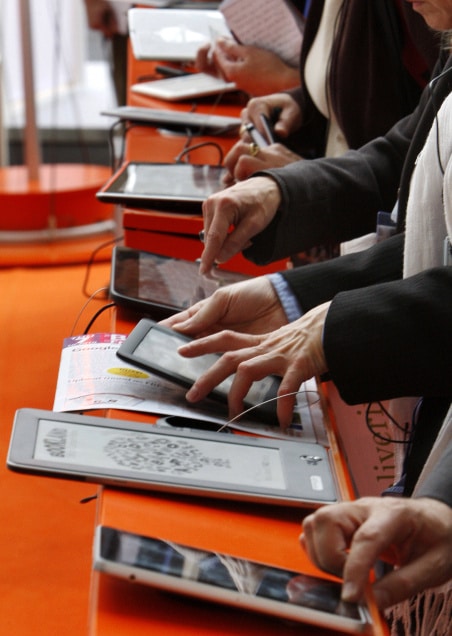 According to a story in the New York Times, author Arnon Grunberg is going digital. But what makes his project unique is the fact that he’s going digital while he writes the book…and he’s doing it with electrodes attached to his head.

Yes, rather than the typical story of an author–even a well-known and highly respected bestselling author like Grunberg–going digital with the publication process, Grunberg is part of an experiment he helped establish to monitor his brain activity while he writes his most recent novella. Even more sci-fi oriented, the first fifty readers of this project’s outcome will undergo the same electrode0based response recording while they read the finished novella.

According to the article by Jennifer Schuessler, “Over the past two weeks, Mr. Grunberg has spent several hours a day writing his novella, while a battery of sensors and cameras tracked his brain waves, heart rate, galvanic skin response (an electrical measure of emotional arousal) and facial expressions. Next fall, when the book is published, some 50 ordinary people in the Netherlands will read it under similarly controlled circumstances, sensors and all.”

The purpose of this futuristic undertaking? To try to discover the connection between creativity and the consumption of that creativity by readers. And while the researchers will work to figure out how the readers’ brains connected in various ways with the author’s work, Grunberg himself sees a more invasive approach to the project, likening this type of connection with the way retailers like Amazon invade on the reading experience via e-readers.