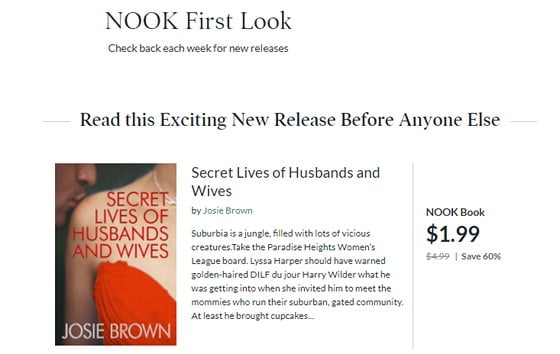 Barnes and Noble has just launched a new e-book promotional system called Nook First Look that offers readers a chance to buy e-books at a discount before they are released to the public. Every month the bookseller will release two or three different titles and offer varying degrees of savings.This month B&N is offering Secret Lives of Husbands and Wives by Josie Brown via Nook First Look for $1.99, but the pre-order price at Amazon and other ebook stores is set at $4.99.

Barnes and Noble has also unveiled a new podcast featuring in-depth conversations with today’s most popular authors including Peter Gethers, John Grisham, Paula Hawkins, Imbolo Mbue, J. Courtney Sullivan, Colson Whitehead, and more. The Barnes & Noble Podcast goes behind the scenes with today’s most interesting writers, exploring what inspires them, their methods and what they were thinking when they wrote their books.

The B&N Podcast is available for listeners today on BN.com/podcast, the iTunes App Store, Apple Podcast, Google Play, Stitcher and a few others. Barnes & Noble will be posting six to eight interviews each month, with many more huge names to come during the packed fall publishing season.

“Barnes & Noble is already a destination for customers to meet the authors they love and have conversations about their favorite books,” said Fred Argir, Chief Digital Officer. “The B&N Podcast is a natural extension of those conversations, bringing the biggest names in literature directly to their audiences in a meaningful new way that only Barnes & Noble can deliver.”

What I dig about the podcasts is that you do not have to be a member or do business with Barnes and Noble. You can listen to them for free, which gives people a chance to listen to their favorite mainstream author discuss their train of thought while researching and writing a book and maybe some interesting tidbits.