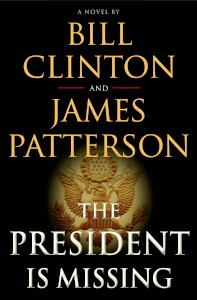 Bill Clinton is going to be co-writing a mystery novel with James Patterson. It is going to be called The President is Missing and will be hitting store shelves in June 2018. Terms of the deal were not disclosed but it is a joint venture between Knopf Doubleday and Hachette.

The publishers said the novel will be “informed by insider details that only a President can know.” For his part, Clinton said: “Working on a book about a sitting President—drawing on what I know about the job, life in the White House, and the way Washington works—has been a lot of fun.” Patterson said he has enjoyed the collaboration. “Working with President Clinton has been the highlight of my career, and having access to his first-hand experience has uniquely informed the writing of this novel.”

Knopf’s Paul Bogaards said Knopf and HBG worked seamlessly in getting the deal done. “When you have two accomplished publishing teams working together on a project, decisions are arrived at collaboratively and without impediment.”