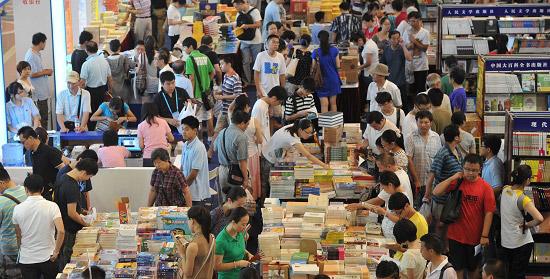 This year at the Shanghai Book Fair, ebooks were brought to the forefront with the biggest ever Digital Zone. There is currently massive growth in China, with 56.69% more book sales and 32% increase in ebooks in 2011 from 2010.

According to Kan Ninghui, deputy director of Shanghai Municipal Bureau of Press and Publishing, total output value of Shanghai’s digital publishing industry in 2011 was as high as RMB 27.8 billion Yuan, increasing by 26.36% year on year. Digital content companies are also thriving with 54 currently registered with a permit.

The Shanghai Book Fair this year brought some of the biggest companies seeking entry into new digital distribution channels. Hanvon and Cloudary were the leaders in this department and wanted to expand their current business offerings. Cloudary currently has 68 million users via China Mobile, who read ebooks on the platform and 28 million of readers have paid for content.

The main issue that was discussed at the fair by the 500 publishing houses was how they can get their books in digital form. There has been great resistance to bringing first run fiction to the digital realm because of piracy. Measures to address this will be the main focus on a business level. The other aspect that was addressed is sorting out the publishing companies with their ambiguous copyright on digital ownership and agreeing on a standard for ebooks.

One of the big pitfalls of the Chinese Publishing industry is that many of the digital content is manga, fan-fiction, or self-published books. These are written by people who grew up using the internet and are very savvy. The old guard basically runs the traditional publishing industry and many are quite resistive to putting their big books on it. Many have experimented, but drew low sales. This is mainly because the publishers do not have a solid digital division. There is no one data-mining user behaviors or creating marketing departments to get the word out with press releases and advertising online. Most of the book promotions are done in conventional ways in the retail environment.

In a recent interview, Shi Hongjun (vice president of Shanghai Century Publishing Group) said, “The trend of digitization is unstoppable. Electronic books will make reading more popular and cover a wider scope of the population.” Of course, there are a lot of problems to be solved at present. For instance, should the government make state-level regulation on the standardization of the format of electronic books, so as to avoid the current great loss of society resources and help to create orderly competition under the guidance of industrial regulative departments?