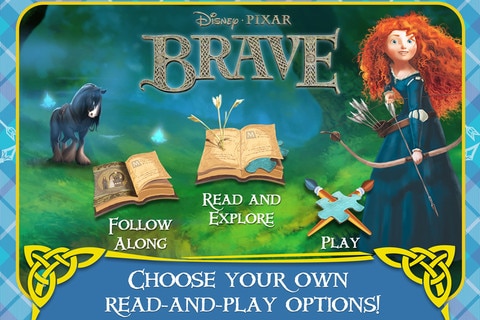 Disney Publishing Worldwide today announced the release of two new apps for the Apple iPad! It features the original characters and storyline from the new movie Brave. The “Brave: Storybook Deluxe” and “Brave Interactive Comic” Apps incorporate dynamic animation and interactive content as readers follow the story of Princess Merida, who defies a custom that brings chaos to her kingdom and must rely on her bravery to undo a beastly curse.

We met up with Disney at Book Expo America last month where they showed off the new Apps for the iPad based on Brave. The main thing we took away from it was the fact that Pixar and Disney both share art assets, video, audio, and animation between the different department. This allows for a more streamlined process and accelerated development. Here is the information on the two new apps.

“Brave: Storybook Deluxe” is a complete retelling of the film for children ages 5 and up, following Merida through a courageous voyage to defy an age-old tradition and forge her own destiny. The app features beautiful art, character voices, dynamic animation, and surprising interactive elements. Readers can also play an engaging archery game where Merida and Angus discover the true meaning of bravery as they gallop through the woods shooting makeshift targets with a bow and arrows.

“Brave Interactive Comic” is a more advanced interactive graphic novel for kids ages 7 to 12 that turns this retelling into an enriched animated comic with special effects, enticing music and sounds, as well as engaging content that can be discovered with a single tap. Readers can watch as Merida discovers the mystery that lies within the Scottish Highlands through clips, sketches, and participate in step-by-step drawing lessons.