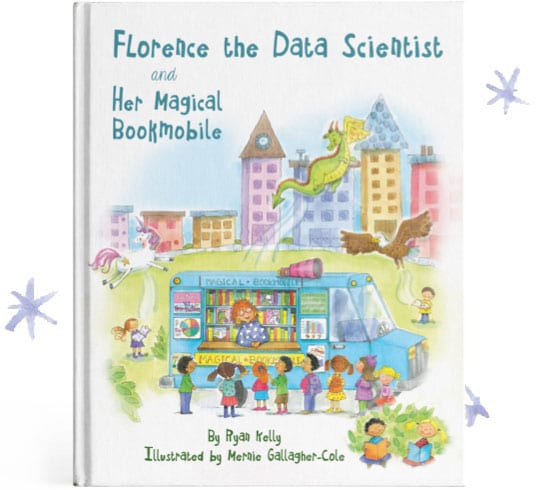 Data scientists are among the most in-demand these days and that has much to do with the newfound fascination for robotics and automation. So, whether it’s self-driving cars or making sense of a bunch of images, its data science at work here. Unfortunately, that might be a bit too much for even adults to have a sound understanding of, let alone kids.

That said, Ryan Kelly, a marketing exec at Domino Data Lab that deals with data science, took up the challenge to set the record straight and open up the concept to kids or even toddlers. That he happens to be the parent of a toddler inspired him all the more to pen an eBook on data science, which he feels can be just the right tool to spark interest on the subject.

The eBook titled Florence the Data Scientist and Her Magical Bookmobile is all about a young girl named Beatrice who loves books. Then, a bookmobile enters the scene and shows up in her locality. While that’s fine, the one thing that intrigued Beatrice no end is that its driver, Florence has perfect knowledge of just the right book that each child in the locality loves to read. Now that’s what data science and its ability to predict is all about.

Also, it being the Math Awareness Month, the eBook is being made available for free. Launched on April 6, it includes other ‘add-ons’ developed by the National Science Teaching Association. Those include an at-home activity sheet for the wards and a ‘Daily Do’ lesson plan that applies to the teachers. There is further incentive for learners from kindergarten to the fifth grade which includes a $5,000 college fund contribution along with a brand new Chromebook computer if they are able to complete and submit the activity sheet.

That should be reason enough to opt for the free eBook and to unravel all the capabilities that data science can bring along. While that should just mark the beginning of a potentially life-long and rewarding association with data sciences, there is quite some money to be made in the process as well.