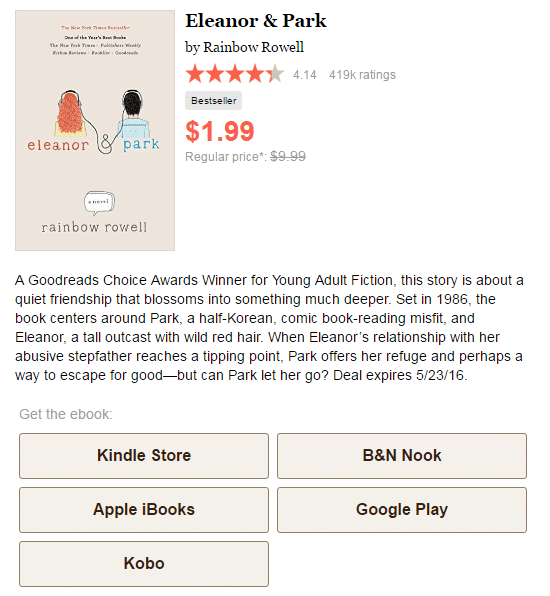 GoodReads really wants to start making money. The social book discovery network has unveiled a copious amount of new initiatives in the last year to make this happen. They are charging money to authors and publishers to  orchestrate Kindle Giveaways, promote books on the site with Sponsored Books and now GoodReads wants to send an email directly to your inbox and tell you what books you should buy.

Goodreads Deals is a program that was just announced today and it is only available in the United States. Here is how it works. GoodReads will scan your “want to read” shelf and send emails to you based on the authors and genres they think you might like.  They will also let you know if any  of the titles are eligible for a price promotion so you can save a little bit of extra money.  The e-books can be purchased from Amazon, Nook, iBooks, Google Play or Kobo.

Right now GoodReads is being coy about exactly how much this program will cost, but their wording on their blog post leads me to believe they will be charging publishers and authors different rates. When the program expands outside of the US it is likely they will offer package deals to reach a certain region or charge more money to showcase the e-book in all of them. Whenever you buy an e-book with the link that is send to your inbox I am very sure that GoodReads will be earning an affiliate fee, thereby making even more money.

If you do not want to receive these emails to cut down on the amount of spam you get in your inbox there are steps you can take.  Under your account settings there’s now a Deals tab where you can update your preferences/opt out.