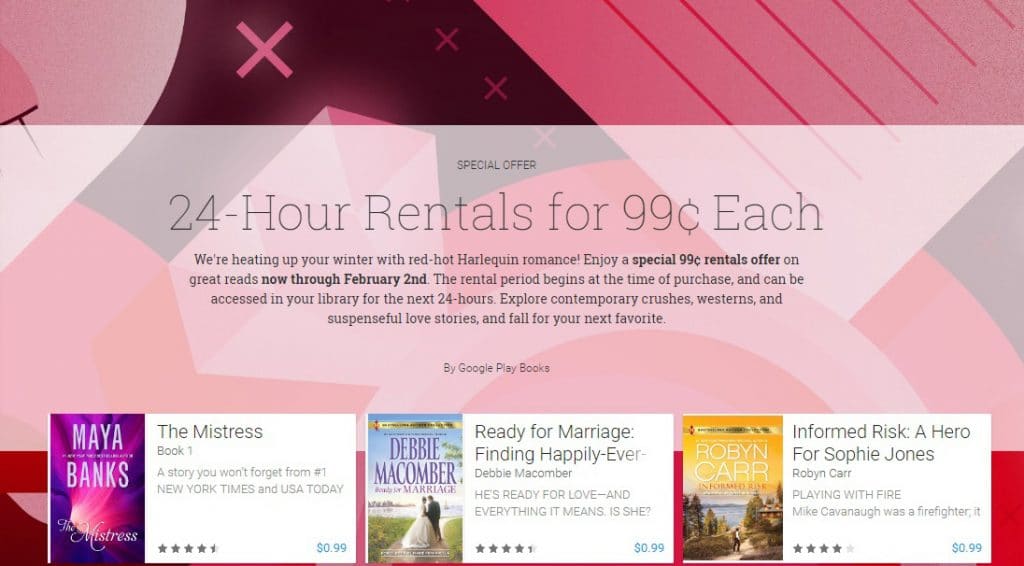 Google Play has been experimenting with renting e-books, hoping to turn the most voracious readers into long term customers. Here is how it works, Google is partnering with major publishers to offer a limited selection of e-books for $1.00 and you can access them for up to 24 hours.

Last December Google partnered up with HarperCollin’s Haper Teen imprint to offer 21 YA titles over a period of 11 days. The program seemed to be a resounding success because on Friday Harlequin is participating and offering over 40 different e-books from authors such as Lisa Harris, Debbie Macomber, and Maya Banks.

Many different companies have found romance readers to be their bane. Scribd had to axe the vast majority of their catalog and pivot their business from an unlimited subscription model to a credit based one, primarily due to romance novels. Entittle and Oyster completely went out of business due to the exact same reason.

It remains to be seen if readers will respond to the 24 hour rental scheme and keep on purchasing from Google every month to read on the cheap. Will this be enough to make people switch from Amazon, B&N, Kobo or other online retailers to do business with Google instead?  People buy e-books because they they are supposed to be cheaper than print, but over the course of the past two years since publishers have been setting the prices, this isn’t the case anymore. Maybe Google is onto something.