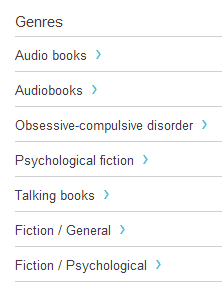 Google may soon be adding audiobooks to its Play Marketplace in the very near future. A new section was discovered in the eBooks selection of the market that links to a non-existent audiobook page.

Google Play was launched a few days ago, and many different services have been amalgamated under one singular banner. The main feature, other than the name change, was the addition of Google Books into Google Play. It looks like the company may be rolling out its own audiobooks section to compete with Audible.

Audiobooks are one of the those neat services that a ton of people use, but there are very few companies that can provide any kind of competitive advantage. Amazon purchased Audible a few years ago, and remains the industry leader. Google intends on going head to head with Amazon in terms of content distribution.

Many users always email us asking about audiobooks and discussing how they use audiobooks in their daily lives. One of the leading elements that make them appealing is during long commutes or when taking mass transportation. Let’s face it, if you have an MP3 player or other device, you get rather sick of your playlist, and reading a book on the bus or subway is not the easiest thing in the world to do if you are prone to motion sickness. Audiobooks allow you to easily listen to new material and digest a book.

Audiobooks in general have really matured in the last few years and many recording studios contribute to enhanced quality. Listening to books has grown more appealing, thanks to a growing growing cadre of famous actors.  Some examples include Naomi Watts (”Summer,” by Edith Wharton), Dustin Hoffman (”Being There,” by Jerzy Kosinski), Annette Bening (”Mrs. Dalloway,” by Virginia Woolf), Samuel L. Jackson (”A Rage in Harlem,” by Chester Himes), and Kim Basinger (”The Awakening,” by Kate Chopin).

Google intends on not only launching an audiobooks section, but is also rumored to peddle newspapers and magazines. It has registered a number of new domains lately, such as googleplaynewspapers.com and googleplaynewsstand.com.