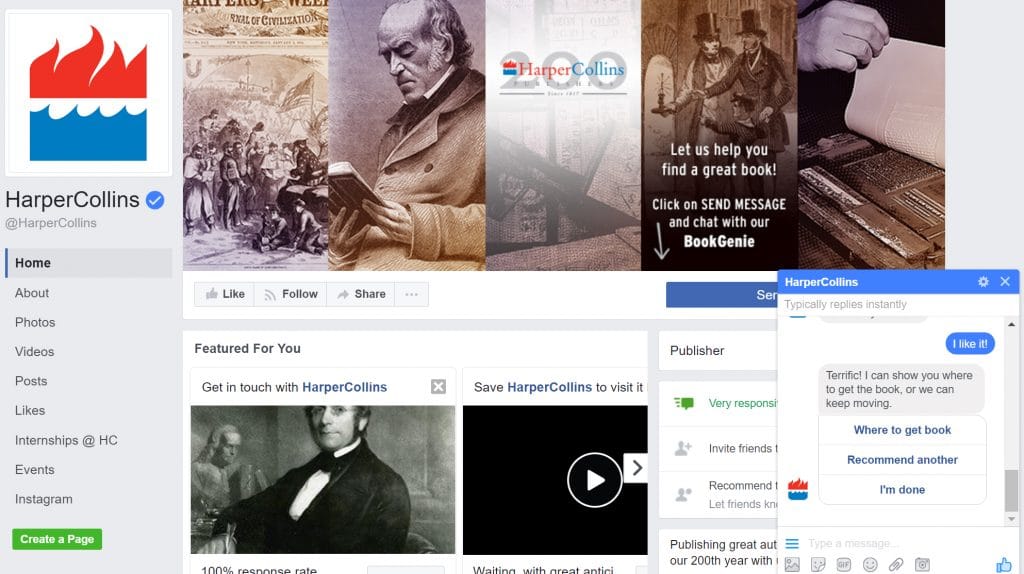 Book recommendation systems have been getting more advanced in recent years.  In late 2014 the PenguinHotline was unveiled and gave users the ability to fill out some information about their potential book gift recipient and Penguin staff would agnostically give a list of titles and last year, the NPR created an online “Book Concierge” that aggregated the titles reviewed by the organization and had some useful filters. HarperCollins is now getting into the mix with a couple of book recommendation AI bots that are available on Facebook.

BookGenie is a general purpose recommendation engine that is available on Facebook.com/HarperCollins and Epic Reads, which was developed specifically for YA titles and can be checked out on Facebook.com/EpicReads. Both services feature interactive artificial intelligence widgets that can find new HarperCollins titles based on their taste, general mood, and past favorite books.

Here is how it works in a nutshell. You simply visit the two Facebook Pages and click on Send Message and it will open up Facebook Messenger.  You will be prompted to checkout a list of recent bestsellers or have the AI recommend you a book based on the last one you have read.  Once you input the last title you enjoyed it will list the title and you click YES. It will then give you a series of titles and you can select YES or NO. If you liked the book you will be taken to the HarperCollins website with a full description of it and where to buy it in print or digital.

Margot Wood, Epic Reads senior community manager, said the most popular question her team receives is: “What book should I read next?” Wood said that now, with the bot, “we can scale conversations with our community and engage, share content, and deepen consumers’ connection with our brand.”