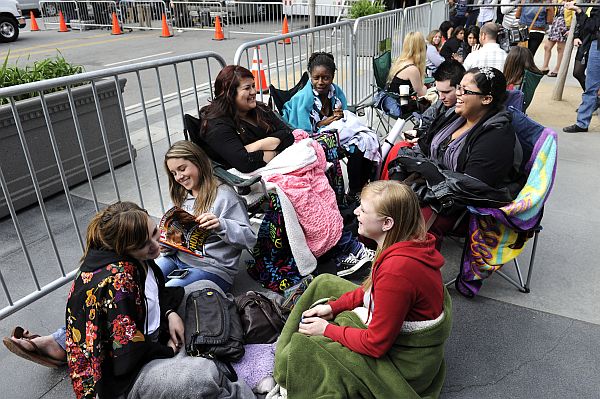 Suzanne Collins currently sitting pretty because she is Amazon’s best selling author of all time. In three short years, her Hunger Games trilogy has sold a copious amount of copies and has received the feature film treatment. How did it do at the cinemas during opening weekend? Try $155 million dollars! Only the Dark Knight and the last installment of Harry Potter did better.

What are people saying about the film and how will it do in the long run? Males and females responded strongly to the film, promising a healthy run through March and much of April. A whopping 95 percent of moviegoers recommended the movie, according to survey site Rottentomatoes.com. Critics weren’t far behind; 86 percent of reviewers gave it a thumbs-up, the site says.

In Vancouver, aside from Star Wars and Star Trek, fans never really got into dressing up or camping out the movies. I passed by three different theatres in town around 8 hours before the midnight screening on Friday and teens were camped out! People were dressed up as their favorite characters and I would not be surprised if this movie was the highest grossing one of the year.

Did you see the movie yet? What do our readers have to say and is it a solid piece of cinema or just hype?