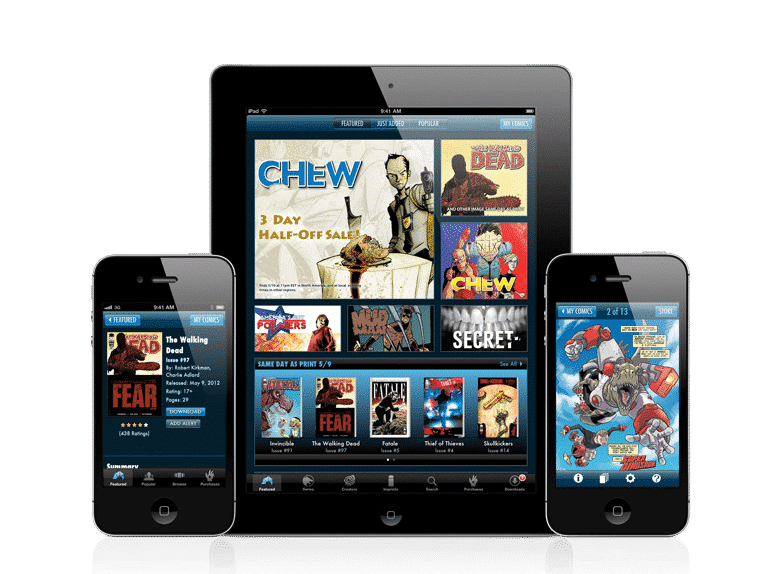 Image Comics is fairly popular and is powered by Comixology for their digital distribution partner. Currently, some of Image’s bestsellers include the Walking Dead and The Darkness. The company announced a new upgrade for their iOS application that brings a slew of new features and over 200 comics available in CMX HD.

“Bringing the 3.1 interface to the Image Comics app is a huge win for Image Comics fans,” says comiXology co-founder and CEO David Steinberger. “The Image Comics library is already a major cornerstone of the modern day comic industry and with 3.1 that library is now more accessible than ever.”

“We couldn’t be happier with the updated Image Comics iOS app and we can’t wait for fans to see books like The Walking Dead, Saga, Fatale and The Manhattan Projects displayed in CMX-HD,” says Image Comics Publisher Eric Stephenson. “Bringing the best digital reading experience to the best creator-owned comics just makes sense. ”The Image Comics 3.1 iOS app sports a sleek new design and interface that enhances overall stability and usability. The advanced UI enables a near instantaneous launch dramatically cutting down the app’s load times, allowing fans of Image’s comics and graphic novels to easily find new content and start reading faster than ever before.”

In addition to the overall re-design, the app now has new discoverability options, enhanced feature spotlights, more categories for new content, series and storyline listings, and CMX-HD resolution books for users of the new iPad. To help better organize downloaded comics and graphic novels, “Purchases” now has its own tab so users can always find their comics for quick and easy download without cluttering their “My Comics” area.

The new Image Comics app really shines on the New iPad or iPad 3. You won’t get the same resolution on previous models. One of the drawbacks is the size of the digital comic files. HD versions tend to run you around 60 to 100 MB and the normal versions are often only 16 MB.