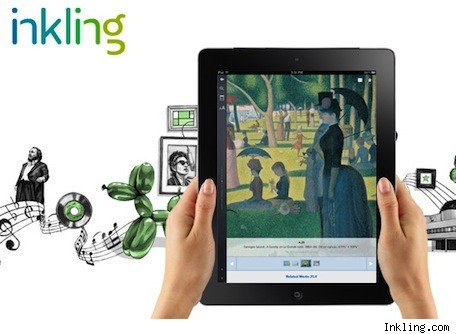 Inkling has been busy at work creating a new methodology to allow the creation of enhanced ebooks. Inkling Habitat lets publishers create enhanced ebooks with interactive elements such as  HD video and 3D!  E-books can immediately be published to iPad and the Web in HTML5, with updates pushed to both platforms at once. This will save time in managing each book differently across the various platforms it auto-submits the published books.  There are also some crowd sourced elements to the new tools that allow people to co-produce content at the same time.  This is a boon for project managers overseeing grunt work being done by cheap outsourced labor like graphic designers, artists or sound engineers.  It also has some sweet features to rollback to previous iterations, which is useful incase there is any breaking elements to a new build that was synced.

Inkling Habitat is a new platform is aimed at publishers and companies that do large scale ebook releases. It has been an internal project for the last two years and is being rolled out to to the public since it has made great strides to mature and poses an alternative to the new Apple iBooks Author program. Inkling has signed on some content partners whom is using their service, such as consulting group in Aptara who has been using the software for sometime. There is also reports that Inkling has signed on some top-tier publishing companies to use their software to create enhanced ebooks.

Inkling has some major competition such as Coursesmart, Kno and Chegg that all have tools for publishers and companies to use in order to create ebooks. The one advantage Inkling has is the HTML5 aspect which is huge in the mobile world. Most people have tablets, laptops and mobile phones and creating dedicated apps to read your books warrants constant updates with new OS iterations constantly coming down the pipe. The beauty of HTML5 is that it can be used in most browsers on many different platforms and does not need to be updated across platforms like iOS, Android, Blackberry and Mango. The books you download can also be accessed for offline reading once you download the initial enhanced book.

If you are interested in checking out the tools you can sign up for the companies early adopter program HERE.