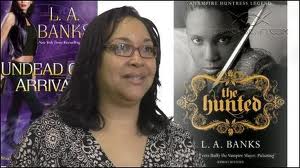 “Several authors have reported today that Paranormal Fantasy author L.A. Banks has just passed away. Banks had been fighting a battle with cancer for some time, one that she tragically lost today. Banks was known to the science fiction and fantasy community primarily for her Crimson Moon werewolf series as well as The Vampire Huntress Legend series. Under a variety of pen names, L.A. Banks also wrote in several other genres including crime, thriller, and romance.

L.A. Banks was a witty, upbeat author who brought energetic and strong sensibilities to her work. The fields of SFF and her fans will miss her deeply.”

Banks may have been best known for her paranormal fiction, notably the Vampire Huntress series and the Crimson Moon series, but also had several major titles in print in her graphic novel series of the same name. The author gained respectful renown for featuring a variety of races and ethnicities in her strong leading characters.

The writing community and publishing industry have turned out their support for Banks’ family and fans at this difficult time. Sites have been established where those who are interested can donate to help ease some of Banks’ medical bills, which was the only hopeful news behind her passing yesterday. Writers, editors, agents, and publishers spent much of yesterday on the various social networking sites linking to the fund that has been established.