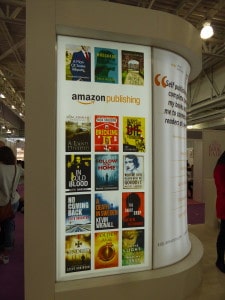 The London Book Fair is the largest publishing event in the United Kingdom. Indie authors are really pissed off at the organizers this year due to the fact that all of the self-publishing companies have been relegated to the very back of the showroom floor.

Ben Galley, who self-published The Scarlet Star trilogy, said Author HQ and “indie-centric” stands such as Kobo, Draft2Digital and Amazon KDP had been moved to “the very back of Olympia—as far away from the rest of the fair as seemingly possible”. He added: “If I’m to be brutally honest, it feels like that kids’ table at a dinner party. LBF has plenty of opportunity to expand its offering and mix the traditional side of the business with the indie side. Indie publishing is here to stay, and it’s about time that authors—the creators of the media this industry revolves around—were recognised as a valuable part of LBF.”

Eliza Green, indie author of Becoming Human, said the move was a “step backwards”. Chele Cooke, who self-published Teeth, added: “It’s a shame that LBF has pushed authors into a back-alley area, next to the toilets and as far away from any ‘real publishing business’ as possible. For a few years it seemed that it was attempting to expand on author involvement but this has taken a back seat, instead [it’s] left to companies who wish to sell products and services.”

Indie authors have only been attending the London Book Fair for the past 3 years. It is not surprising that indie authors are at the back of the bus, because they simply aren’t important to the greater publishing industry. Don’t forget, the Book Fair is first and foremost all about auctioning off book rights all over Europe.