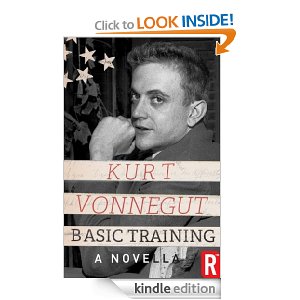 A long lost Kurt Vonnegut autobiographical manuscript called Basic Training has been issued as a Kindle Single. It is available now on Amazon for $1.99 and is a 22,000-word social commentary written about 60 years ago when Vonnegut was 30.

What is this book all about? Jason Kirk of Amazon said “Kurt Vonnegut’s posthumous books have proved as surprising and wonderful as almost anything he published while alive, and Basic Training is no exception. Read a certain way, this previously unpublished novella provides something of a primer to many of the themes that would emerge in the half-century of work that followed it. Here especially is the deeply lived morality, coupled with a bone-deep mistrust of his fellow man. In this arresting, violent, and largely domestic tale, teenage pianist Haley Brandon heads up a cast of seemingly wistful characters, their lives bandied about by vague circumstance and a hard-headed, power-addicted tyrant. In true Vonnegut style, the milquetoast often turns out to be the determinant agent in a world dominated by the willful (to put it nicely), and in this, longtime Vonnegut fans will find much that’s familiarly satisfying. Passing fans of absurdest fiction, lovers of the novella in all its welcome restraint, and avid readers of Kindle Singles should all hail the arrival of the late, great Kurt Vonnegut to these ranks.”