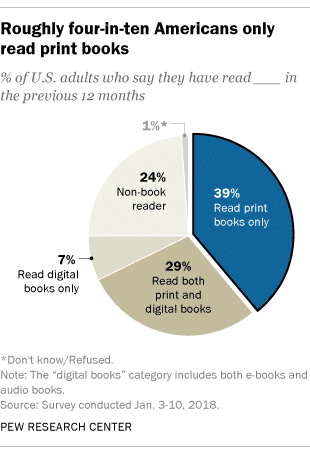 A new report by Pew has proclaimed that ebook and audiobook usage is on the rise. One in five US adults have listened in an audiobook last year and one in four has read an ebook. Print books remain the most popular format for reading, with 67% of Americans having read a print book in the past year. While the sheer amount of e-book readers are similar to those from a survey conducted in 2016, there has been a modest but statistically significant increase in the share of Americans who listen to audiobooks, from 14% to 18%.

Despite some growth in certain digital formats, it remains the case that relatively few Americans consume digital books (which include audiobooks and ebooks) to the exclusion of print. Some 39% of Americans say they read only print books, while 29% read in these digital formats and also read print books. Just 7% of Americans say they only read books in digital formats and have not read any print books in the past 12 months. Some demographic groups are more likely than others to be digital-only book readers, but in general this behavior is relatively rare across a wide range of demographics. For example, 10% of 18- to 29-year-olds only read books in digital formats, compared with 5% of those ages 50-64 and 4% of those 65 and older.