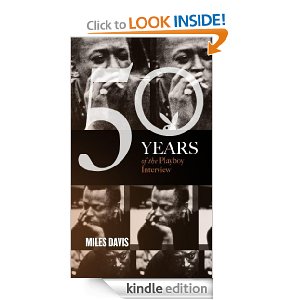 Playboy has released a new series of ebooks called 50 Years of the Playboy Interview exclusively in Amazon’s Kindle Store. People with Kindle e-Readers or supported devices with official Kindle apps can get reading right away.

50 Years of the Playboy Interview features one-of-a-kind, in-depth, provocative interviews with the world’s greatest celebrities and icons, such as Tina Fey, Francis Ford Coppola, Howard Stern, Fidel Castro, and Robert DeNiro. In showcasing the remix of iconic Playboy with new digital content, each Kindle title includes a specially designed front and back cover with celebrity photos and revealing quotes. Each ebook is around 14 pages and all we be available for only $0.99.

Specific interviews you should lookout for are the upcoming Kindle ebooks for Jack Nicholson, Martin Luther King, Joe Namath, and Miles Davis.