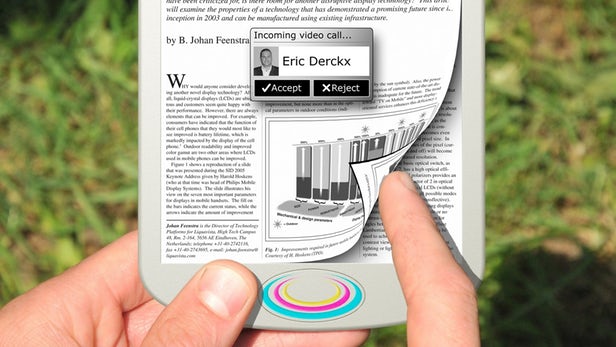 Amazon has dismantled the Liquavista offices in the Netherlands and moved all of the equipment out. All of the key executives working in the division have already been moved into other departments and Amazon has shut down all job listings to work on Liquavista. This is a serious blow to consumers that were hoping to see a color Kindle or Fire tablet employing Liquavista technology.

Liquavista is based on Electrowetting, which modifies the surface tension of liquids on a solid surface by using a voltage. When a voltage is applied, the wetting properties of a hydrophobic surface can be modified and the surface becomes increasingly more hydrophilic (more wettable).

With Electrowetting displays, the modification of the surface tension is used to obtain a simple optical switch by contracting a colored oil film through applying a voltage. Without a voltage, the colored oil forms a continuous layer and the color is visible to the consumer. When a voltage applied, the oil is displaced and pixel becomes transparent. When various pixels are independently activated, the display can show any kind of content including text, images and video.  Thanks to the high switching speed of electrowetting and its applicability to small pixel dimensions, electrowetting displays support a fluent user interface and are ideally suited for information displays showing animated and video content.

According to new reports Amazon is throwing in the towel on Liquavista because they simply were not able to apply it on any of their existing hardware like Kindle e readers or Fire tablets. That is not to say that Liquavista is completely dead, but I think Amazon might be licensing it out to other companies.

A new startup called Etulipa has just launched in the same town that Amazon had their Liquavista team.  They are focusing on billboards and digital signage, a segment of the market that has been exploding in recent years.  Their value proposition is that they can compete against energy-consuming LED billboards.  Although they have not released any products yet, the fact they claim to be using Electrowetting technology is interesting.

It will be interesting to see what happens with the Chinese plant Amazon started in 2016 and if it will be shut down too. There was only executives working there and Amazon never hired the groundforce labor to ramp up production, they only had project leads.