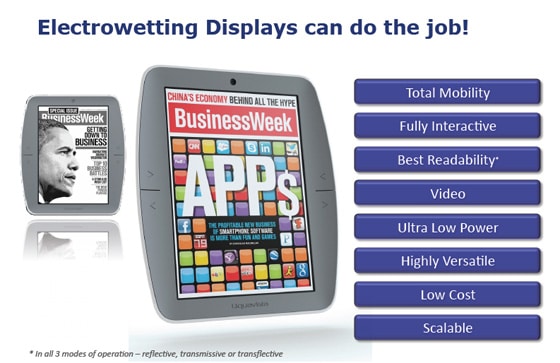 At the first annual e-Readers conference in San Francisco, we met up with Kurt Petersdorff the Commercial Director of Liquavista! During the conference he gave us an interview and talked about the future of Liquavista technology and how his company was effected with the Samsung investment in his company earlier this year.

The essence of Electrowetting technology is that it is highly scalable as the e-reader and tablet market has gravitated from small screens to displays exceeding 10 inches. From a manufacturing point of view, it is easy for existing LCD plants to incorporate Electrowetting into its process. It is basically the same entire procedure to create the screen, except instead of using Liquid Crystals they use a different fill.  One of the huge benefits of Liquavista technology is that it is flexible, which means it is a much more robust surface. This is much akin to the same type of display that Plastic Logic uses in their new e-reader and there is a famous video online of two guys hitting each other over the head with it and the glass not breaking. If you ever have dropped an iPad or a iPhone you know the LCD glass breaks rather easily because it is NOT FLEXIBLE.

The below video outlines the full presentation Kurt made at the conference and I got a chance to talk to him about their relationship with Freescale and exactly what happened with the e-reader they had a prototype for. We then find out about their greyscale technology and color offerings.  We also get a surprise conversation with Mirasol and Liquavista.