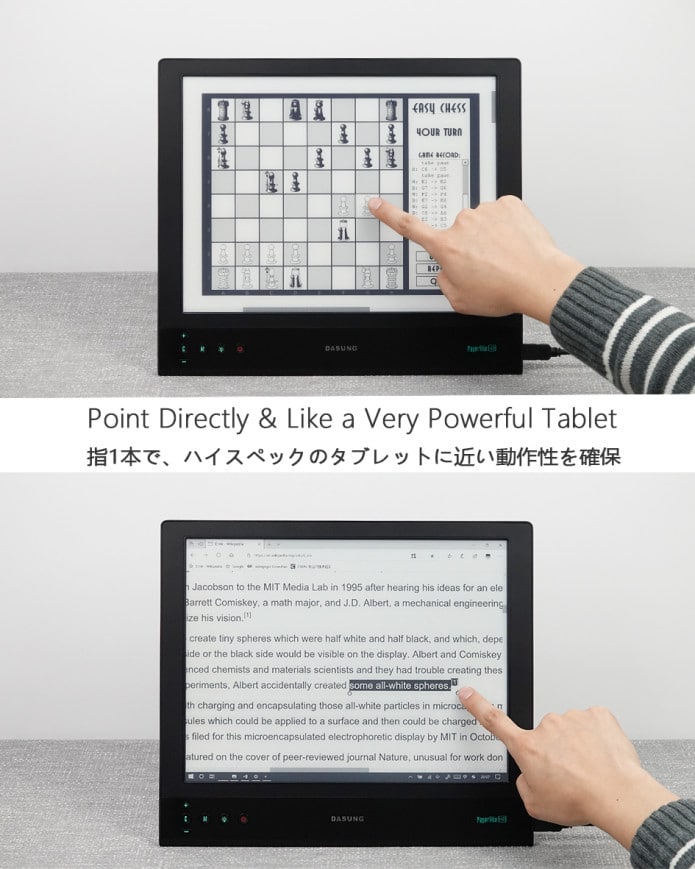 The Dasung Paperlike Pro Touch is the first monitor that you can use that comes with a touchscreen. It allows you to pinch and zoom and use it for all gesture control and interactions. Dasung launched a crowdfunding campaign for the device on Indiegogo for $698 and it will start shipping in July. Dasung often does campaigns like this for new products like this, so they know how many to manufacture for the first run. It will eventually be offered on Amazon and other distribution channels, but the price will go up around 30%.

The Paperlike Pro Touch features a giant 13.3 inch E Ink Mobius display with a maximum resolution of 2K. This means you will likely get around 1600×1200 if your video card supports it. It works with any device that has an HDMI port, which means it will work on your PC,MAC, Laptop or tablet. It has an adjustable front-light, which has the LED lights on the bottom of the bezel and projects light evenly across the screen. This is great if you use it in low-light environments, but it also can be shut off completely.

Dasung specializes in E Ink monitors that can be used for primary purposes or secondary. The PRO Touch does not have an internal battery or storage, so it can’t be used a portable e-reader. Its sole purpose is to be a monitor and Dasung claims this model is as fast as an LCD monitor, due to their Floyd technology, which rapidly displays content. You might not be able to watch flawless Youtube videos on it, but it is a great monitor for people with vision disorders or simply can’t look at a backlit monitor while writing or doing productivity tasks.

The company has raised over $80,000 USD in ten days and there is 18 days left in the campaign. This is likely the best monitor Dasung has ever released, but we reserve our final judgement for the final review.